I'm still waiting for someone to come back and tell me how delicious this is." That was the less-than-inspiring parting words from my local fishmonger, as he handed me 1.5 lbs of wild ray 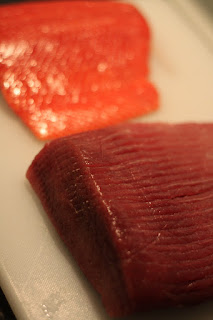 meat. I think he meant it as, "If you like this, please let me know." I took it as, "I haven't had any repeat customers for this fish." But my mind was set. I knew I was going home with that fish the moment I saw it there on the counter.

The ray looked like an overgrown skate wing crossed with tuna. Blood red, more like beef than tuna, with a thick, muscular-looking grain. In the photo to the left, you can see a fillet of wild salmon in the background for comparison. Although I'm teasing the fishmonger in the opening line, he actually was full of good information. "It's a major predator in the bay, without any natural predators," he explained. Apparently the rays were getting fat off bellies full of the Chesapeake's cash crops of oysters and clam beds. So they were trying to cut down the ray population by marketing it as a new, delicious dinner option. And the best part? $7.99 a pound for wild, unfrozen fish. I've only seen wild sardines for cheaper. 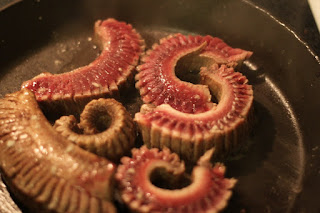 But still, it looked scary. My fishman said the marketing information described it as more like meat than fish, with the final suggestion, "great on the grill!" Lugging my ray home, I thought it might be best to just pan-fry the ray and see how it tastes unadorned. There would always be other times to get fancy with it. The size and texture of the ray made me think it would be a tough piece of fish, but I didn't want to cook it rare like tuna, for worries that bottom feeders might be harboring any number of parasite. When the slices of ray hit the hot pan, the squirmed, flexed, then buckled into u shapes. Another challenge to deal with. I began to have more doubts than hope. 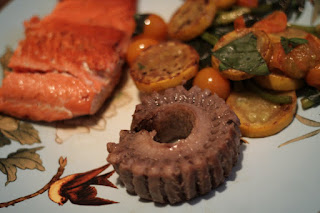 Upon first bite I realized how wrong I was. It was fully cooked, but tender and moist. But not fishy at all. Not beefy either. In fact, it didn't taste like much of anything. Afterwards, I read reviews that described the fish as being similar to veal. Tender and mild. During the meal, I told Carla (in a very unflattering but oddly accurate description) that "this tastes like a steak you get at Denny's." Modestly tender, but no flavor whatsoever.

But that's not going to deter me from trying this again. Anyone can cook an amazing scallop dish, as scallops taste great to begin with. You just plop them in a pan and get them out as quickly as possible. I think the challenge is taking a tough bit, like ribs, rump, or ray, and making it into something sublime and delicious. Plus, this is something we need to do to help the bay. It's the same thing as killing a cow. Eat the steak, but also eat the trip. So if we wake Chesapeake clams, we're going to need to eat a little ray now and again.
SHARE SHARE SHARE