I've been reading more about vinegar, so I couldn't help but to try out an interesting recipe I came across. Four Thieves Vinegar is an old, old, old mix that has as many origins as the name 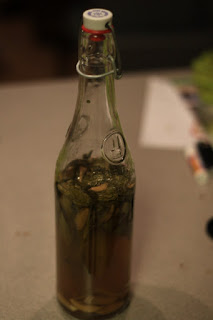 behind "shoofly pie." The most popular story is that four thieves were arrested while robbing houses during the black plague. They were promised their freedom if they would reveal how they could rob the homes of plague victims without getting sick. And this vinegar is their key!
Although some modern wizards speculate that mutations on the CCR5 gene may have provided resistance to the black death (and HIV-1), it's equally likely that vinegar packed with herbs and garlic is just as effective. Traditionally, you add four different herbs; one for each thief. If you're feeling particularly whimsical, go with parsley, sage, rosemary, and thyme. I substituted basil and majoram for the parsley and thyme, but that's just what I had on hand. Besides the huge quantity of crushed garlic will most likely overwhelm any individual herbal nuances as they marinate in an acid bath of vinegar.

The vinegar itself is raw apple cider vinegar (complete with mother), along with some sweeter moscato vinegar to take the edge off. And while my odds of contracting buboes may have not have changed, I have been loving this garlicky vinegar on potato salad, beans, and lots and lots of spring greens that have been shooting up from the garden.
SHARE SHARE SHARE