Pho is a Vietnamese soup. In American, it's been popping up on the menus of fancy restaurants as a "fusion" dish a lot these past 3-5 years. You'll also find it in Vietnamese restaurants, for a 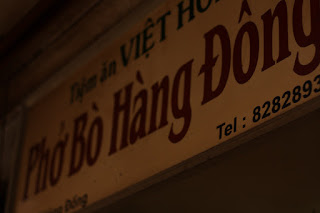 much better price than the fusion shops. When I think of "soup," the mental image in my head is of something homey. Steamy broth, wide egg noodles, cubes of white chicken. Pho is interesting because it's the iconic Vietnamese dish, but almost completely relegated to street vendors. If grandma is cooking up a pot of pho soup, it's to sell on the corner rather than dish out to the grandkids. 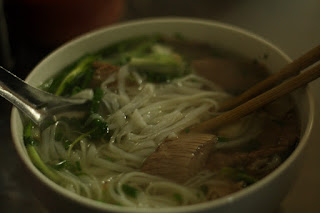 Our guide explained that this was a matter of economics. Some people might make pho at home as a change of pace, but it will never taste as good. Unless you're making a giant pot to sell, most people cannot afford all the beef bones required to make the stock. And if you do scrape your money together for all those bones, you probably do not have enough cash leftover to buy the fuel required to bring a large pot of water to a simmer for hours. So when you want pho, you hit the street. 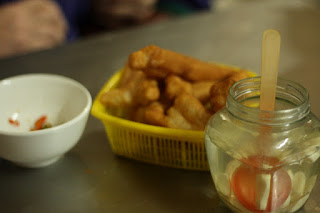 The pho shop we went to just did beef bo, although they did have the complete genitals of a bull hanging outside the shop for anyone who wanted to perk up their soup. An older man shredded cooked beef brisket, put it into a bowl with noodles, then passed it to a younger assistant. If you ordered "rare pho," he would put in a handful of raw beef. Boiling stock was poured in each bowl, slightly cooking the ground beef, but leaving the center pink and bloody. A fistful of cilantro and assorted herbs completed each dish.

At the table, you personalized your pho with fresh chiles, fish sauce, and pickled garlic in vinegar. They would also pass around bowls of 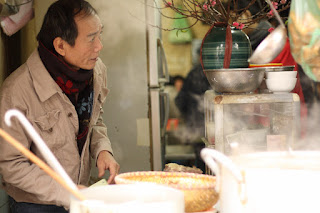 fried dough strips to sop up the last of the broth. I was surprised how clear the broth was, but the flavor was extraordinary. Modestly beefy, but only after the combination of chiles, scallions, and lime juice faded from your tongue. The flavor of beef mingled with the warm spices of star anise and Saigon cinnamon. It was bright, then bold, while simultaneously warming and soothing your body like chicken soup.
SHARE SHARE SHARE

And you can buy a cool T-Shirt that reads: "iPho -- Made in Vietnam."

Recently, it cost only 60,000 Vietnamese dong on the street in Hanoi (roughly US$3, until the Vietnam government recently devalued its own currency by 8%).
TGD

A sign of the times - I guess a dong doesn't buy what it used too.