Once you decide to eat beyond skeletal meat, a lot of culinary doors open for you. Not eating 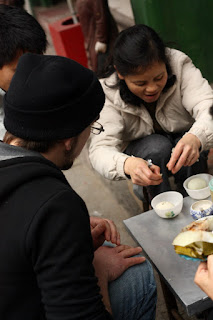 organs like liver and kidneys is like eating vegetables but never going past the salad section. You never try the refreshing crunch of raw jicama or the oddly artichoke-eqsue cardoon. To open up your culinary boundaries is to have a lot more fun at the table. So that's why I had no problem eating a cooked duck fetus. In Southeast Asia, ducks are everywhere, running semi-wild. Apparently the ducks have small branding tattoos so that you don't eat your neighbor's duck. Lots of ducks mean lots of duck eggs. Some of them are fertilized eggs (as factory eggs are never fertilized - the hens just lay sterile eggs), which grow up into ducklings. If you're hungry and have semi-wild eggs, there's a chance one might be "sprouting" inside. But with limited food sources, are you going to just throw away a perfectly edible food? Probably not. Called balut or Hột vịt lộn, the duck eggs today are an everyday food for many people. Our Vietnamese guide, Tien, told us that balut was considered a good food to eat when you are sick. "Since the duck is so young, it's body is very simple, like a cell," he explained, "so this makes it easy for the body to digest and turn into energy." 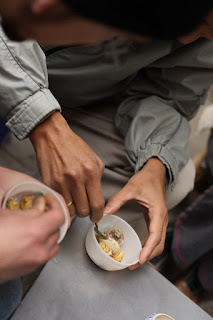 After convincing him I was serious about eating one, he took me to his favorite balut restaurant. Which was just a child-sized plastic table with three seats. He told the owner we would like some balut, which she retrieved from a metal pot wrapped in several cloths to keep the steamed eggs hot. Sitting on tiny stools, we ate the balut with salt and fresh shredded ginger.

It tasted like a hard-cooked egg. Mild, eggy, and chewy, with a slight meatiness like boiled chicken breast. You could see the developing duck, but the bones were still cartilage and negligible to the chewing effort. Twice I bit into a juicy pocket, which I believe was the actual duck body, but again it tasted mild. 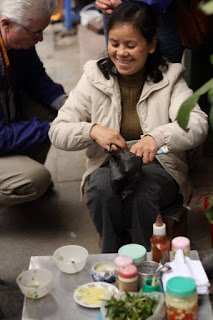 I felt very happy to have enjoyed what I thought might have been a challenging food experience. As we walked through Hanoi, our guide pointed out a second balut stand that was currently serving several middle-aged Vietnamese women. "More balut," he said, "except these women order them four at a time." So I guess just eating one balut still classifies me as a tourist.
SHARE SHARE SHARE