Some things just aren't very photogenic. Eight pounds of ground pork shoulder and liver, for example. But I'll tell you this: I never worry about someone else bringing the same dish as me 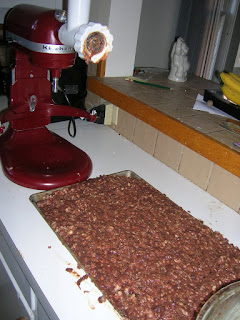 when I go to a potluck party. Getting invited back is another matter.

For the Superbowl my boss invited me over to a colleague's house. He was making homemade pizzas, pulled pork sliders, and an incredibly indulgent mac n' cheese (topped with poppy seeds, which really added a lot of flavor, surprisingly...). I knew some of the other guests coming. One usually brings a cake (this time it was chocolate cupcakes topped with peanut butter icing), another does dips (including an insane "Reuben dip" of chipped corn beef, Swiss cheese, sauerkraut, and thousand island's dressing, all swimming together fondue-style in a crockpot), and the third usually brings chips and the like. 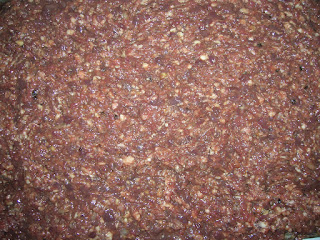 I've still got a ton of piggy organs from Carla in the freezer, so I wanted to make use of them. I settled on the liver, as it was over four pounds, which is a lot for me to eat in a reasonable amount of time. I felt pate might come off a bit toffee-nosed with a football crowd, but who doesn't like sausage? To thin out the liver flavor and texture, I added four pounds of diced pork shoulder to the grind. I had some leftover lardo (cured fatback) from La Quercia that would add a bit of fat and juiciness, along with keeping the liver from drying out. To season it I went with an aggressive blend of black pepper, dried chipotles, thyme, garlic, and clove. 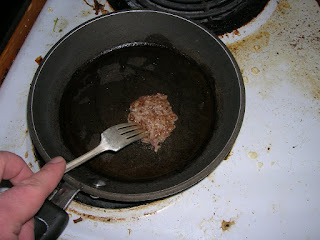 When I cooked a little sample meatball I was surprised to find the salt content was really spot on for not adding much salt. Then I remembered the meat was pulling a lot of salt from the lardo, which could have been disastrous if I hadn't checked it beforehand. Otherwise it tasted fine, but the chipotles didn't add much smokiness.

To remedy this, I decided to hot smoke the entire sausage in a pinwheel. I've been fiddling with an improvised smoked for a few weeks now, but I'll post about that separately. While the smoked piped happily along, I had the traditional sausage-maker's lunch of Momofuku ramen (thanks to Mike and Becca for the book!). After about an hour in the applewood smoke the sausage came to 180 F. About 20 F hotter than I wanted, but I was hoping the lardo would keep it from being too dry. 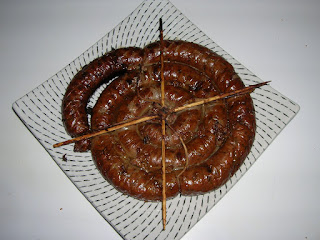 liked it! One woman described it as tasting like "ground beef wrapped in kielbasa," which I'll certainly take as a compliment. Only one person picked up on the liver, but he was a chef and enjoyed the "pate sausage," as he called it. I served it with a vegetable chutney I made last fall, which added some acidity and brightness to the heavy flavors of smoked meat and black pepper. Now I just need to find a party recipe that involves six pig feet.
SHARE SHARE SHARE