My sourdough souffled! Today we received about seven inches of snow, so I worked from home. 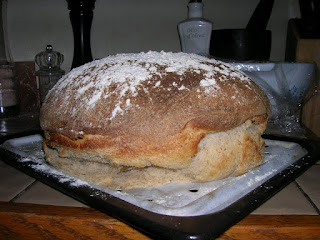 That allowed me the time to try out my new sourdough starter. While the bread did come out with a full, slightly sour flavor, I feel the real success here is my bread pan.

I randomly grabbed the two-tier roasting pan than came with my toaster oven. It was clean and the perfect size for my bread. Professional bakeries know that a humid oven helps their bread to rise, along with enhancing a crispy crust. Since you average home oven doesn't have the steam injection vents a bakery oven does, home bakers have found lots of shortcuts to replicate the effect. One is to put a small pan of water in your oven as it preheats. Another is to spray the 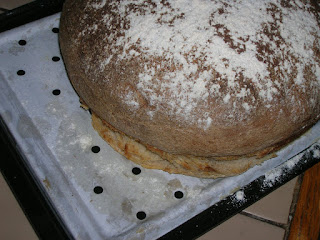 crust of the risen dough with water before putting it in the oven. I like the method where you just dump a half cup of water on the floor of your oven, throw the bread in, and slam the door.

But this time I poured the water in the base of pan, then put the risen bread on the perforated top pan. I thought this would concentrate the steam around the bread, but I didn't realize how dramatic the effects would be! The water evaporated in the bottom pan, pushing up through the holes and through the base of the bread. This gave a mushroom-cloud like "poof" of dough, just like a souffle. But as the dough cooked, the crust hardened and it maintained this lofty shape. The bottom was firm, but soft and damp from the steam. But a quick flip and two minutes under the broiler fixed that. 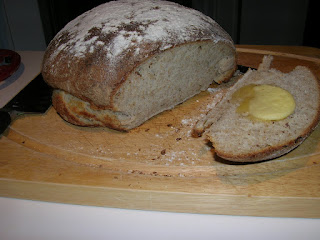 As a point of perspective, the loaf came out at least twice as big as the original risen dough. I'm sure other home bakers have discovered this, perhaps even put hard thought into coming up with this idea, but right now I'm coasting on a wave of serendipity. So if you'll excuse me, I'm going to butter another slice and go look at the snow.
SHARE SHARE SHARE