I first read about black garlic through Vosges, the wonderfully eclectic chocolate company who makes candy bars with white chocolate and dried black olives. They offer a package combining different cheeses to pair with chocolate, along with different accompaniments for the cheeses. One of them was Black Garlic, which they described as a fermented version of regular garlic. As someone who loves garlic and fermenting foods, I decided that this was something I needed to acquire.
Then I forgot about it. Which happens. I fiddled with my cheeses, made some sausage, and time rolled on. Until this past weekend, when I saw it in the organic foods section of the grocery store. The flame burst forth anew!

Originally a flavoring of Korea and Thailand, black garlic is just regular garlic, which gets its namesake color from oxidization. It is not fermented with a microbe like kefir, or salt like sauerkraut. BlackGarlic.com explained that each bulb is naturally fermented over a month through the use of high heat and humidity. I'm wondering if I can recreate this environment by placing a ceramic crock on my radiator, filling the bottom with a 1/2 inch of sterilized salt water, and suspending bulbs of garlic on a grate above the water. But part of me thinks I'll just end up with rotting garlic, rather than a culinary delicacy. 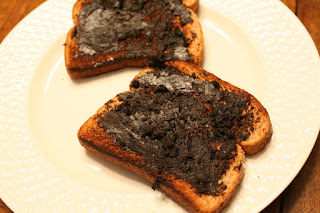 And it really is a delicacy! Black garlic trades its bite for a savory, umami-like sweetness, like the robust flavor of molasses. It also softens into a mashable, jelly-esque consistency, like a warm gum drop. Carla and I ate a few cloves on their own, then decided to try it as a spread on bread with olive oil. As you can see from the picture, black garlic tapenade isn't the most aesthetically pleasing thing in the world. It sort of looks like we spread toast with a pureed piece of 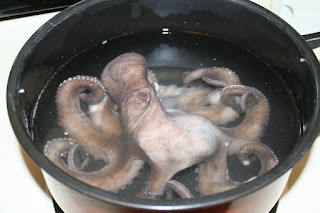 burned toast. But it was tasty!

To try the black garlic on an entree level, I decided to try something Korean. Knowing how much Youngjoo and Steve love eating octopus whenever they visit Youngjoo's family in Korea, I thought it would be a natural choice. Octopus has a slightly meatier flavor than squid, while still maintaining some of the natural sweetness of squid. I slowly poached the octopus for about an hour until its rubbery texture faded into forkable-tenderness. I pureed the black garlic with more olive oil, a bit of soy sauce, and minced scallions. After pre-heating the broiler, the octopus got chopped up into bite-sized nodules and tossed in the black garlic glaze. Two minutes under the broiler seared the garlicky goodness into the cephalopod's delicious flesh. 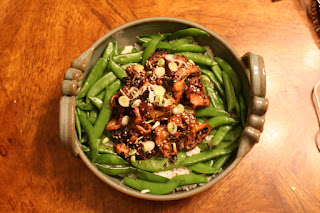 There was a good amount of the glaze leftover, so I made a side of long-grained rice to help soak up the rich broth. As a whole, I thought the dish came out great. It was also a full-flavored dish, one that was perfect for winter. That's something you don't always get with fish or mollusks, unless they're smoked and covered in a heavy cream sauce. One thing about black garlic is that you need to use much more of it than normal garlic, as the overall flavor has mellowed. Over the course of a day (including our snacking) we went through about two heads of black garlic. But no garlic breath!
SHARE SHARE SHARE

That octopus-in-a-pot photo gave me a little surprise! But the dish / black garlic sounds great.