Two weeks ago I had the most amazing bottle of wine while out dining with friends. It was made from a grape varietal called Nero d'Avola, a grape indigenous to Sicily 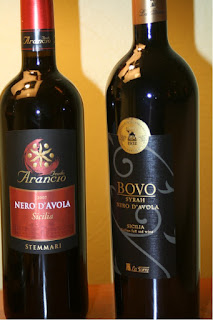 and recently the pride of Sicilian viticulture. The wine had a wonderful earthiness to it, with a slightly mossy flavor dominating the initial taste. This down tempo opening slowed into a rounded fruitiness with a bare trace of tannins and no real acidity.
Before Sicilians began to market nero d'avola as a stand-alone grape worthy of wine recognition, its robust flavor made it marketable to be blended with more "name-brand" old world red wines. The more I learned about this grape, the more I became intrigued. I hoped that other brands of nero d'avola would share the earthy, cellar-like qualities that I enjoyed in the first bottle. This in mind, I picked up two new brands, Arancio 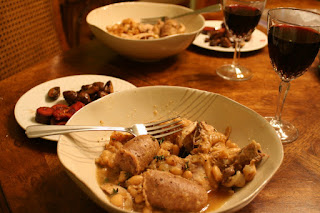 Cutting to the chase, neither one quite hit the mark. The Arancio held a much stronger tannic backbone, with only a faint breath of any mossy softness. The Bovo was more rounded, without the slight coarseness I found in the Arancio. It still didn't have the supple finesse of that first bottle, however. Not to say either one was a "bad choice," but they weren't quite what I had developed a taste for. They did make a nice partner for a rich dinner of cassoulet, so I can't say it was a total bust.
SHARE SHARE SHARE

It could be the year. I had a recent bottle of Grillo from Feudo Arancio and it was extremely dissapointing, not at all as I remembered it. But then again most Sicilian wines I've had have been a little bit 'coarse' as you put it, comes with the terroir I suppose.