I think it was my brother Mike who first told me about Mexican mole sauces. He's visited Mexico on several occasions to study their reptile populations. It was on these trips that he began enjoying mole, a complex sauce combining various roasted peppers, fresh chiles, ground nuts, citrus juice, and most famously bittersweet chocolate. He also had a nasty loaf of bread smeared with beans and broiled 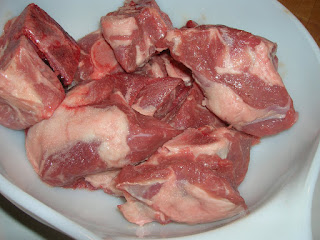 The specialty food market, riding the success of anything with "chipotle" in it, has produced a whole range of bad-tasting sauces labeled as "mole." You can find them in many super markets, but it's cheaper to just buy tomato paste and combine it with cocoa powder. That approximates the taste pretty closely.

It's not that hard to make your own mole at home. It can be scary to see an arm-length recipe for mole 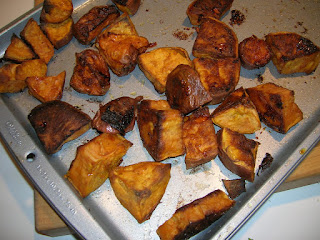 sauce, but you probably have most of the ingredients in your pantry. Onions? Garlic? An orange? Raisins? Basic spices like cumin, nutmeg, cinnamon, and pepper? Then you just need some good dried peppers and a bit of bittersweet chocolate. And don't overdo the chocolate. It's not a chocolate sauce; just a sauce finished with a bit of cocoa to mirror the deep, sweet flavor of the peppers and spices.

So I had the sauce, now I just needed something to sauce. Wegmans had some nice, cheap cuts of stewing lamb on the bone that I thought would take well to a slow simmer in the mole. To sop up the rest of the mole, I roasted chunks of sweet potato, as their sweet flavor would be a nice compliment to the mole. 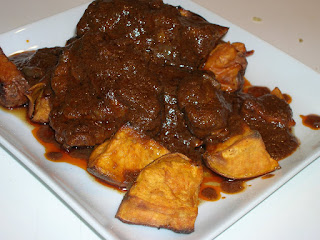 And ta da! Mole! Ole! Warm, rich, and spicy lamb married perfectly with the sweet potatoes and earthy sauce. The only thing I would change would be to actually add a bit more garlic and chiles. The bony cuts of lamb were very lamb-y tasting, which I enjoyed, but took the leading role away from the mole. Perhaps it will mellow out over the next day, but I'm still quite pleased with this for tonight's dinner.
SHARE SHARE SHARE