Carla's Mom got me a meat grinder! I've long been hankering for a meat grinder, ever since I lost the blade to my original machine. 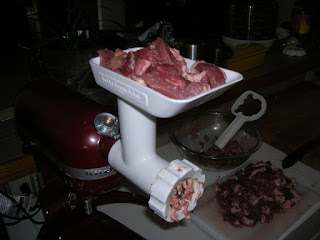 Unfortunately it was a European design and no one in the US makes blades compatible with its damn metric sizing. But surprise! A spanking new model! And this was an upgrade! It hooks up to my Kitchen Aid Pro stand mixer, which lets me have a second hand free to evenly squoosh the meat into the casing. If you've ever used a hand-cranked meat grinder (as I would borrow one from my hunting buddy, B), you know it's almost impossible to 1) feed the meat, 2) turn the crank, and 3) push out the casing.

It's a lot of work to make sausages. First you buy your meat, in this case a 9 lb pork shoulder. Then you slice up the meat into cubes or strips and season them. Then you let them chill, as meat always grinds easier cold (or even partially frozen). Otherwise the fat will smear and you'll end up with a sausage that tastes like wet newspaper. I didn't believe it would be so bad, until I wasted an entire rabbit making some pretty terrible sausage. Then you chill the ground meat while your casings soak. Then it's time to actually make the sausages. 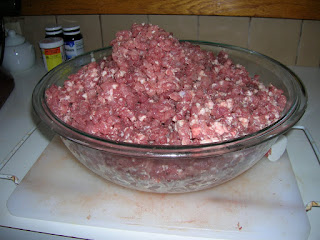 So why go to all this effort? Probably because of how amazing homemade sausages taste, coupled with the fact that most stores only offer two types of sausage, "Italian Hot" and "Italian Sweet." Sure, they do have those fancy "breakfast" sausages, with apple, maple, or blueberry, but that's pretty much the wildest you can find.

I love making wild tasting sausages. My beef sausages with truffled bone marrow were a pain in the ass to make, but totally worth it. I'd love to make them again, but I still have nightmares about using a grapefruit spoon to scrape every last gram of marrow out of veal femur bones.

So for my first run with the new grinder, I kept it straight forward. Smokey, earthy Cuban spices blended perfectly with the dark pork meat, helped along with a generous scattering of minced garlic and onion. But how to serve it? The first phrase to come to mind was "pork and beans," but that sounded too simplistic. So I gave it a fun twist and made chili dogs. 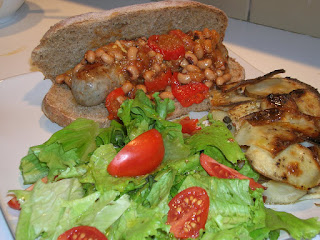 The cumin in the chili would echo the cumin-laced spices in the pork meat, along with helping to add moisture to the sausage. I didn't add a lot of extra fat to the pork shoulder, so the meat was actually rather lean. A zesty chili sauce would help make up for any dryness. I made a batch of whole wheat rolls, enriched with beer and butter, that added a new layer of flavor. So while not the chili dog you might find at a local fair, I was more than pleased with the results.
SHARE SHARE SHARE

YUM YUM YUM, thats about all I can say!