Parcels? I suppose you could call them parcels. It sounds much nicer than "faux cabbage rolls." Carla loves the barley burger at Otto's pub, which started a discussion on making a meatloaf cut with whole grains, rather than mixing torn white bread into the ground meat. To make it a bit more interesting, and more nutrient-dense, I decided to make a riff of cabbage rolls using Swiss 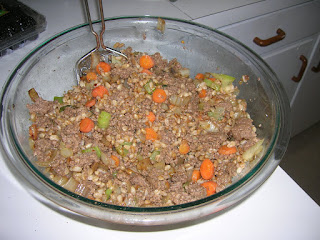 To start, I sauteed ground beef in olive oil with diced onions, garlic, carrots, celery, and the crunchy stems of the chard. This got a spice-up with ancho chili powder, cumin, cayenne pepper, and oregano. While this was all cooking, I simmered farro grains until they burst and got soft. Farro (sometimes sold as "emmer") is a grain grown throughout Italy and Israel, but most of the marketed varieties today are Italian. It's a nutty, flavorful little grain, and some geological evidence credits it as one of the first domesticated grains, hybrids of which were cultivated to produce the wheat crops we use today. I tossed this historical little grain with the rest of my sauteed hash.

The dense chard leaves needed to be softened so I could make them pliable, so I quickly dunked them in boiling water for 60 seconds before evacuating them to an ice water bath. Once the meat/farro mixture had cooled, I blended a beaten egg into it to help hold it together. Most meatloaves hold their shape thanks to the bread acting as glue, but with the farro I wanted to ad 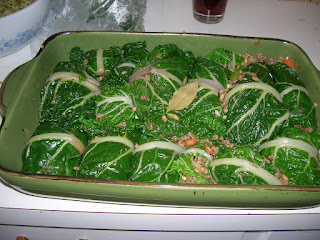 d some extra insurance. I plopped small handfuls of the mix onto the chard, then rolled the leaves in under themselves to secure them as a tight parcel. Thankfully, they tightly filled a casserole dish, keeping them closed up.

To add a bit of moisture and meatiness to the dish, I poured one can of beef broth over the entire dish to keep them saturated while they baked at 375 F. 45 min later, the chard parcels emerged. Surprisingly, they absorbed every bit of the broth into the farro, leaving a dry pan behind when I plated them.

Served with a bright, zippy sauce of pureed parsley, lemon juice and olive oil, the rolls tasted rich and filling. The larger rolls had a tendency to crumble once you cut into their centers, so I should probably stick to smaller chard rolls, or add extra thickeners (like bread crumbs) to hold everything together. But this would definitely be a fun dish to recreate with pork or turkey wrapped in kale, collards, or mustard greens.
SHARE SHARE SHARE