I'm still recovering from the brilliance of the River Cottage Meat Cookbook. Its recipes keep haunting my dreams, demanding to be conjured in the fiery pit that is my oven. One in particular was the English Pork Pie, a pate-esque pie of forcemeat and spices. A robustly meaty dish, the only vegetable included in the recipe was sage...nary even an onion in sight. Also, if you remember I was on a bit of a 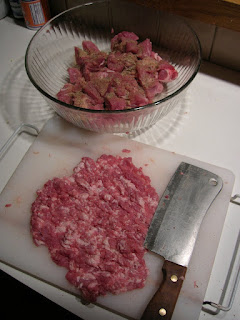 pie-kick last fall. This pork pie's crust struck a note with me as well. The pork pie has a "hot water crust," where lard, butter, and hot water are homogenized together, then whisked into flour, salt, and eggs to create a robust pastry to hold in a mountain of meat. Thankfully, Carla's mother had provided me with a mason jar full of lard, so I was good to go.

Originally this pie crust was meat to act like Styrofoam padding. In the time before Tupperware and smooth roads, if you wanted to bring someone a dish, you would opt for the brute binding power of a hot water crust to keep your hard-earned meat together on the bouncy, potted road. Moving on, I filled the pie with 2 lbs of diced pork shoulder, 1/2 lb of my bacon (chopped), and 1/2 lb of ground pork shoulder. My meat grinder was missing the grind plate, so I ended up banging away at it tartare-style with a cleaver and hoped my neighbors were not sleeping.

This got seasoned with a good dash of sage, one minced garlic clove, nutmeg, white pepper, a dash of cayenne, a bay leaf and salt. Packed into a springform pan, I made a small hole in the top of the pie. More than just a steam vent, this would ultimately allow me access to the inside of the pie, but more on that later. 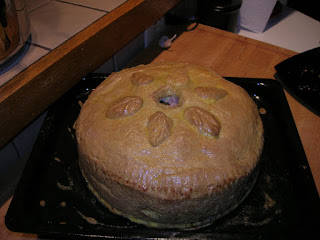 The pie baked for about 2 1/2 hours, the last 15 of which were with the sides of the springform pan off, so it could get a glossy egg wash coat and crisp up. After it had cooled, the pork meat mixture (called forcemeat, in pate-land) had shrunk away from the sides. No big deal, but in the old days, that was spoilage by oxidation waiting to happen. So I followed the old custom and filled up the inside of the pie with jellied stock.

I made the jellied stock the night before by making a beef and vegetable stock with a split pig's foot in it. As the stock simmered, the collagen in the feet turned to gelatin, making it turn to jelly once cold. This is where the small spout on top came in handy. By using a turkey baster, I could fill up the insides with stock that would form a sealing jelly (or aspic) over the insides of the pie. 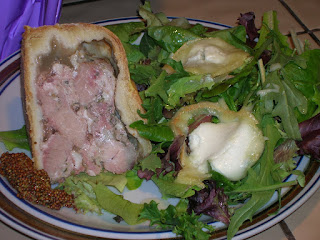 Unlike my tripe (aka "The Feast of Rubber"), this was delicious! And my parents, who came down to visit, can corroborate my story. Served room temperature with grainy mustard and a green salad with broiled Coupole goat cheese, it was a really delightful dish. This pork pie was a nice "transition dish" as it had the richness of winter meals, but seemed to fit for spring with the cool jelly and refreshingly tangy salad. I'd like to try it again, possibly filled with turkey and wild rice, or duck and olives. My mother also made a spot-on comment that the crust was very tasty, despite it's basic ingredients. It was something you enjoyed eating; not just to scrape out the meat and leave a half moon of crust behind on the plate.

In retrospect--despite my earlier comments about a lack of vegetables--I think it's important that future variations on this recipe keep the vegetables to a side dish. Unless pre-cooked, the raw vegetables might throw off too much water while the pie cooks in the oven, leading to a soggy crust. And no one like a soggy crust for dinner!
SHARE SHARE SHARE