From Belly to Bacon

That first photo is a stack of three 4lb sections of pork belly, each marinating in its own salt-brine. For some time now I've wanted to make my own bacon, as good bacon can be hard to come by, and great bacon can hit your wallet for $7-9 per 8 oz package. Plus there's always that 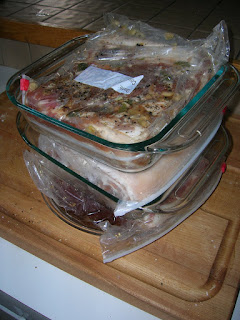 thrill of making your own. Today, bacon is all the rage, with artisan selections popping up on all manner of haut-cuisine menus, and even Outback Steakhouse adding a whole line of applewood-smoked bacon-wrapped protein to their menus. Plus you have various edgy websites dedicated to it, such as BaconFreak.com, BaconToday.com, and iHeartBacon.com. Plus, who could forget the ever-tempting bacon explosion? All in all, I'm happy that the pig is getting so much attention. I just hope an upswing of this is that people are buying better bacon, and not just buying more Bacon McCheeseburgers.

I love bacon myself, and I love that this is one of those early food-staple necessities that's stayed with our society just because it tastes so good. Before refrigeration, pork belly was particularly perishable, due to all those striations of fat running through it. So you could pack it with salt to preserve it, just like corned beef. Smoking further extends the life, as the outer layer of smoked flesh is even more hostile to bacteria than just salt alone. The other option was to pickle the pork, but that was mostly reserved for muscle, as the vinegar would tenderize tough muscular cuts as well. 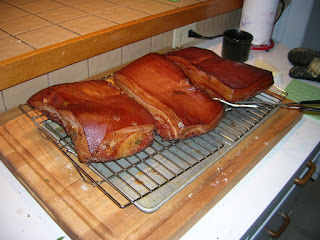 So to make my own bacon, I purchased a 13 lb Berkshire pork belly from D'artagnan, with the ribs and skin on. There's just a few ribs, but you can whip them out in one go with a fillet knife. I then sliced it into three sections, as I wanted to flavor each one differently. Plus I don't have a plastic bag big enough to hold a whole 13 lb belly. One was made with a savory combination of crushed garlic cloves, bay leaves, and cracked peppercorns. The second was a sweet-style cure with Shagbark Hickory Maple Syrup. The last I just left plain, for assorted uses. To this I added a mixture of kosher salt, sugar, and sodium nitrite.

Sodium Nitrite helps to extend the shelf life of 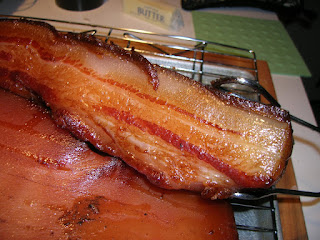 meats, as well as maintain their rosy pink color. It's why corned beef is pink, not an unappealing grey/brown after 10 days in brine. Plus it ensures against botulism in smoked meats. Nitrites also appear regularly in many dark, leafy plants, like spinach. Some people are very anti-nitrite (or anti-nitrate, which is a curing salt used in uncooked products, like prosciutto, salami, coppa, etc), but they're fine in small quantities. Traditionally, nitrites were used in a primitive curing product called saltpeter, but the forms we use today are much better refined, and we eat less of them than previous generations...what with refrigerators and all.

Anyway, the bacon cured for seven days, then I smoked them on my kettle grill for 30-40 minutes. The maple-bacon got an applewood smoking, the garlic-herb and plain bacon were smoked with hickory. After that, I put them in a 200F oven for two hours to bring the internal temperature up to 150 F. Then, the skin got sliced off (and saved for flavoring beans, as well as my roasted sauerkraut), and the rest of the bacon got divvied up by my meat slicer. 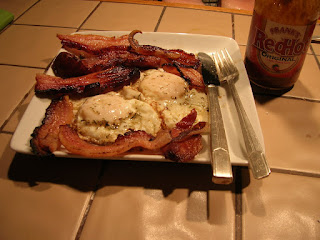 It'll keep for about 2 weeks, but I'll end up freezing a lot of it. I initially expected the smoked, burnished ends of the bacon to be the best, like the crust on BBQ'd pork, but they were unpalatably salty. It makes sense, since they were in direct contact with the salt cure. The interior was much more even-handed though. Hopefully when I finish this batch, it'll be warmer and I can completely smoke the bacon, rather than transferring it to my oven. For the second batch, I'm thinking of doing a Cajun-flavored section, another with Herbs de Provence, and a third perhaps with brown sugar or molasses. Or I could make pancetta, which is not smoked, but rolled up like a big cinnamon bun and flavored with garlic, white wine, pepper, and nutmeg. But right now, time to get frying!
SHARE SHARE SHARE

Oh gosh,
Your bacon and eggs looked so delicious I had to go make some myself, but alas I had only cheap store bought bacon.
Tracy Z