Two weekends ago, Carl and I went out hunting on one of the last open weekends for deer. Unfortunately, we didn't get anything, but at the end of the day two hunters down the way from us ended up leaving the innards of two deer behind. 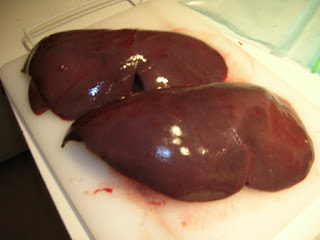 Waste not, want not, so we got two livers and two hearts out of the day after all.

I originally had grand schemes of making a pate out of the deer liver, but time got away from me and I decided to take the short route and make a quick liver spread. Unlike the veal liver I worked with a few months ago, I was surprised that the deer liver, once cooked, was too tough to go through a food mill. But my Cuisinart didn't have any such problem. I blended the liver with a 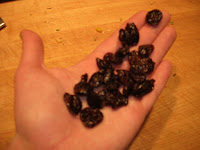 bit of olive oil, a good handful of dried cherries, and some Shiraz red wine vinegar. After that was all blended I added some diced Fresno chilies. Lately, Fresno's have been my chile of choice, as they have a good amount of heat, but this wild, fruity flavor that's like strawberries and honey. Once cooked or roasted, however, they loose that fruitiness, so I mostly use them towards the end of cooking, once the heat is off.

The liver spread came out really well, with the dried cherries 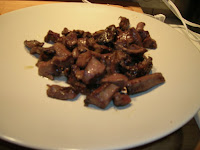 adding sweetness, the chilies bringing heat, and the vinegar kind of beating out some of the gaminess of the liver and leading with a tart, tannic opening that carried the flavors of the Shiraz's original spicy/fruitiness.

My favorite way to cook deer heart is in a stew or chili, and this time I went the chili route. The heart got a quick sear to be browned, then I mixed it with onions, garlic, dried guajillo chilies, cumin, oregano, smoked paprika, thyme and more red wine vinegar. I added a can of beef broth and then enough water to cover the meat, then slid it into a 325 F oven for four hours. In the last hour I added a can of Goya Pink Beans, so they wouldn't get mushy from over-cooking. 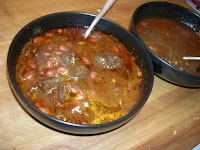 One thing I love about cooking with organ meats is the broth or gravy they create. The first time I made steak and kidney pie, I didn't think too much of the kidneys, as they just got tough, not tender like the beef, with slow cooking. But the richness of the gravy in that pie was heavenly. The same thing goes for this chili. And if you've never tried organ meat, I would start with heart, as it has a texture and taste just like dense beef. There's none of the iron-like flavors you find in beef liver.

So the next time someone offers you a bag of organs "from the woods," don't look a gift horse in the mouth! Unless the police show up the next day...
SHARE SHARE SHARE