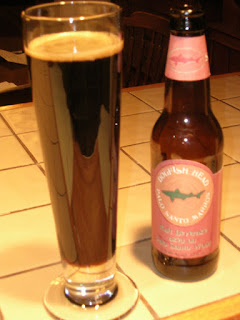 Dogfish Head Brewery kind of flew under the radar for me up until the New Yorker ran an article on them in last year's food issue. As far as American Brewers, I paid most of my attention to Rogue, Stone Brewing Co, and Bell's. I'd enjoyed Dogfish's raison d'etre, but didn't realize all the amazing things they were doing until that article.

One of the more interesting things they've done is created a beer called Midas' Touch, which is based on the dried remains of a fermented beverage found in Midas' tomb. It was found to contain traces of honey, saffron, and grapes. So he created a beer that uses all three ingredients to mimic that ancient recipe.

Tonight I picked up a bottle of Palo Santo Marron, a brown ale brewed in Palo Santo wood. This wood has been revered by local tribes for its aromatic nature, which passes on to foods served in Palo Santa wood. The catch is that this wood is a species of ironwood, known to be incredibly dense and hard. Dogfish Head had the largest wooden aging tanks since prohibition created for aging beer in this Palo Santo wood. Much like aging wine in oak, but much more exotic.

This "Brown Ale" poured as black as a stout, which was my first indication that this beer was out of the ordinary. For a company that clearly understands the difference between a brown ale and a stout, I'm sure the utter blackness that poured from the bottle was the result of the wood. When is the last time a cask of oak made Chardonnay pour black? I tried a google to get a photo of the tree, but mostly got websites selling shamanic supplies for removing "heavy energies."

The aroma was both sweet like English toffee, but also had a slightly roasted background, somewhat similar to Dogfish's Chicory Stout. The actual taste was equally sweet, like thick caramel, with notes of vanilla (probably from the wood - the compound vanillin is found in many woods...which is why artificial vanilla is often derived from wood pulp...think about that next time you're in the baking aisle), heather, and leatherwood honey.

The finish was slightly sweet as well, like a milk stout. Milk stouts contain sugar, which yeast cannot convert into alcohol, so they leave a higher residual sugar that normal beers. I'm not sure if this beer was sweetened by a high amount of malt, but with a 12% alcohol by volume, that's where my guess is. It had a slightly viscous, clingy finish, like the thick, intensified sweetness of eating dried fruits. As the finish faded, Palo Santo Marron's sweetness faded out into the more roasty flavors, then finally ended with another hit of vanilla and the slight tang of alcohol (again from the 12% abv.)

I really enjoyed this beer and could see ending a rather rich winter's meal with it, like you would port. Maybe put it with an espresso creme brulee, or a chocolate hazelnut mousse.
SHARE SHARE SHARE