I've started brewing my own lambic, which is a style of beer that in ways reminds me of blue cheese. Special yeasts (which are actually native to an area of Belgium) ferment the beer, along with creating a layer of white mold across the top of the beer. The beer ages in the fermenting vessel for a year (rather than the normal 2-6 weeks), then is bottled and usually aged for a few months to several years. The yeasts give the beer an extremely strong, robust flavor. Described with words like "citric," "earthy," "barnyard-y," and "horse-like," it's something of an acquired taste. You're friend and mine, Gary "Bring the Thunder" Vanyerchuck featured a whole episode on Lambic's on Wine Library TV Episode #519. 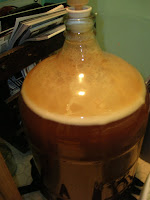 My favorite Lambic is made by Cantillon, who make a very robust, but approachable Gueze. A gueze is like the lambic version of a Meritage wine (a blend of three grape varietals [originally coined in California to mimic Bordeaux-style wines {as they could not infringe on the legally protected Bordeaux name.}.].). So a gueze is a blend of three different ages of lambics, usually pulling from one, two, and three-year aged beers, to offer a more well-rounded drink.

Unlike a lot of beers that get their flavor from hops, the flavoring of lambic are primarily derived from this particular yeast. Lambics actually have little, if any, hop flavor or aroma. They traditionally use old, stale hops, that will not flavor the beer, but still pass on the acid compounds that preserve beer.

So my lambic looks pretty good right now, in a bad, funky way. It's got a slimy, thick foam all across the topic, which I'm assuming will eventually turn into a layer of mold. It's kind of funny to think about having to live with this moldering tank of beer for the next year, but it's not too different from what some cheese makers do.
SHARE SHARE SHARE