I was really pleased with my last round of Nduja and now that I'm down to just two chubs left, I decided to start in on a second round.  This time I wanted to try to up the meaty flavor of the nduja - really bring the savory flavor of the meat head-to-head with the spicy heat of the copious chilies.  I thought about using shank meat, but that's incredibly sinewy, so I decided to try pork heart.

Pork heart is wonderfully intense in flavor, but doesn't have the irony, liverish notes you get from most types of red offal.  In researching, I only found a single reference to "pork heart ndjua" in one brief menu line on a restaurant's web page.  So for the most part I'm flying blind on this, hoping for the best. 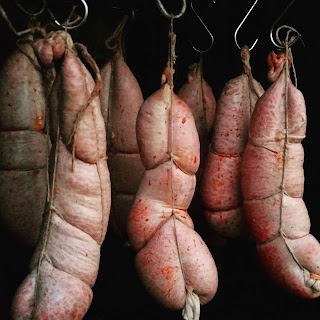 Since heart is so incredibly lean I used pork jowls to as my fat source, plus a few nuggets of attached cheek meat, which is also rich and dense like heart.  Instead of using a huge batch of dried chilies I used a large 950g jar of sweet Coluccio Calabrian pepper puree, along with some dried Pis de Gato chilies grown by my friend and charcuterie expert, Jim. 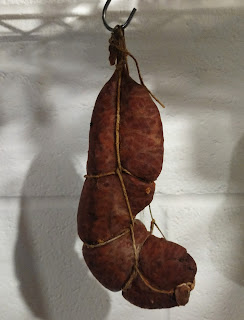 I'm still in love with the rustic, beautiful, and extremely temperamental hog middle casings.  I think the thinness of the casing really helps the smoke to permeate into the meat, but that thinness also makes them more prone to blowing out during the stuffing process.

After fermenting, I smoked the salami for about 12 hours using alder wood.  Now they're just hanging out, slowly curing and turning a more mahogany/red color.