So this is my second time making nduja.  This time I'm taking what I learned from Evan Brady at the KuneKune workshop.
Tasting the finished nduja from the class, I loved how the smooth texture of the nduja was peppered with flecks of dried chilies.  Last time I ground everything to a fine paste, but the pepper flakes really added to the mouth feel of Evan's nduja.  His nduja also had chunks of fat mixed throughout, but I didn't love the chewiness of the fat.

Excited after tasting Evan's nduja, I decided to put up a batch of nduja at home.  I got an 11 pound Berkshire pork belly and ordered some real Calabrian hot chilies from Evan's store, Craft Butcher's Pantry. 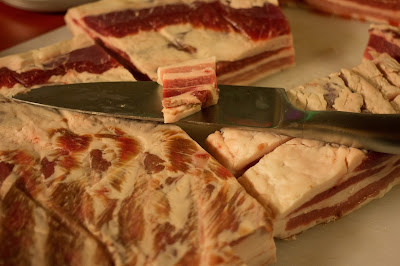 Grinding the belly, I mixed in the salt, curing salt, dextrose, and powdered chilies, reserving the crushed chilies until the final pass through a 1/8th #22 grinding plate. 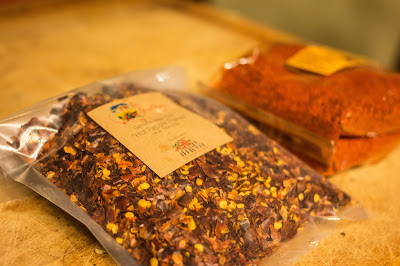 Interesting comparison, but Evan's recipe calls for 25% of the weight of the sausage to be from the chilies, while Ruhlman's recipe is 33%.  I'm curious if that's because Evan chooses the Calabrian chilies, which (I imagine) are more potent than the smoked Spanish paprika Ruhlman uses. 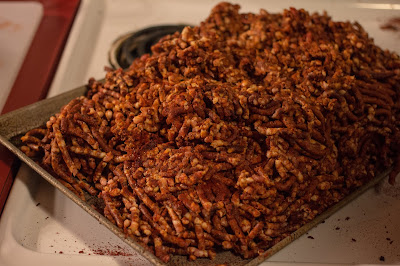 This was also the first salami I made using my Christmas present from my parents, a 1.5 HP commercial meat grinder.  As one might imagine, it made things go much, much quicker.  I love having a large hopper to continuously feed meat into the grinder. 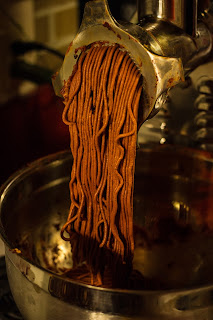 Another first was using these hog middles, also purchased from Evan's store.  These large format casings have a number of pouches and pockets in them, which kept making me think of seeds getting caught in the whorls if you had diverticulitis...

But I digress.  Hog middles are know for being fragile and finicky, but I'm happy to report that I only punctured one during the stuffing process.

A big issue with hog middles is how thin the casings are, which is why the rupture so easily.  I was thinking about this, as I just cased up a batch of fennel-perfumed finocchio salami in double-walled hog casings.  The double layer of intestine makes the salami cure slower for a delicate, nuanced flavor.

But in the case of nduja I believe the thinner the casing the better, and thus the choice of hog middles.  Since nduja is smoked after being fermented for a few days, a thinner casing will allow better permeation from the cold smoking process.  A thick or double-lined casing would limit the amount of exposure the forcemeat actually receives from the smoke. 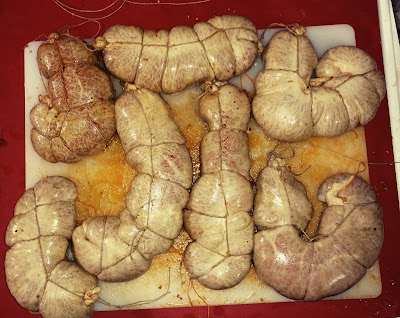 Looks good! When stuffing into larger casing such as beef bung or hog middles, do you use a stuffer? or by hand?

Thanks so much! I always use a stuffer, even for beef bungs, as I feel that the compression from the stuffer helps to reduce air pockets.

how long did you let these large format ndujas cure before getting into them?

I waited 8 weeks, but I'm sure you could get into them sooner. But you should note that these are regular hog middles, not the giant "orba" hog end casings.