A Visit to Thistle Hill Farm

Earlier this month I had the opportunity to visit John and Janine Putnam at their farm in North Pomfret, VT.  The Putnams own Thistle Hill Farm, where they make the extraordinary Tarentaise cheese.  Back in my cheese mongering days I regularly ordered from John, who was also extremely generous with his experience and advice when I began to make cheese at home.

Tarentaise is an organic, raw milk Alpine-style cheese in the tradition of Beaufort or Abondance.  Speaking with John he explained that his family chose to make this style of cheese after touring Switzerland, Italy, and France in '99.  They found themselves in Savoie, France, in the Rhone-Alpes, and felt that they could create a similar cheese at their home in the mountains of Vermont.
This would be a reoccurring-theme in talking with John: what could they do with the land and raw resources available to them at home?  While fir planks were regularly used in France, John uses local spruce to age his wheels of cheese.  To help the humidity, he uses absorbent soapstone from a quarry to line the bottom half of his aging-room walls.  They even set the milk into curd by using a batch of whey from the previous day's cheese making, rather than using a commercial rennet. Heck, the Putnam's built one of the barns and the aging room.  I think the only thing imported at Thistle Hill is the enormous copper cheese vat from Switzerland; a giant gleaming bowl in the center of their cheese making room.
When we arrived in the late morning the barn was almost empty, aside from a few cows and calves.  John explained that the cows spent most of their day and night working their way up the hills, grazing on the new growths of grass higher up in the movement of transhumance.  In the early morning the cows would come back down to the barn to sleep.  In the barn, the cows had access to some hay for fiber, but primarily their diet came came from grazing.
The entire herd is made of Jersey cows, which are known for their rich milk that produces an exceptionally bright, golden cheese.  Tarentaise is only made in the spring, summer, and fall when the cows have access to plenty of fresh grass.  During the winter the cow's milk is sold commercially, while the cows and wheels of cheese rest and age.

Seeing the aging room was a real treat.  Wheels and wheels of Tarentaise and a delicious, savory aroma greeted us when we opened the door.  As John walked through the wheels he carefully eyed up his cheese, inspecting this year's new batches and the batches from the previous year.  Living a few yards from the barn and aging room, John is able to keep a close watch on the progress of the wheels.

There are lots of cheese operations in Vermont, but Thistle Hill is one of those rare truly farmstead cheeses (what the French would call a fermier cheese). The day before we visited, John and his sons were making hay from their fields to feed the herd in winter. 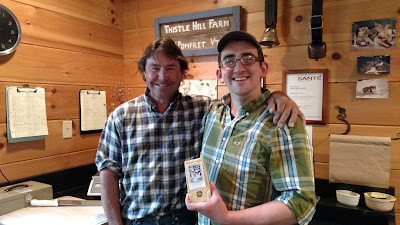 From start to finish, every aspect of what makes Tarentaise an exceptional cheese is tied to the land, the cows that feed off that land, and the labor of John and his family to care and support both the land and the animals.
In a funny twist, the next day I visited the Cabot Cheese visitor center and took a factory tour.  As much as I like Cabot cheese, it was hard not to notice the absence of any cows.  In their place, I saw large trailers holding 7,000 gallons of milk and towering silos holding an unfathomable amount of milk.  Granted, one thing Cabot did have that John was lacking is an "Everything Bagel" flavor cheese.  Perhaps in the future the Putnam's will reconsider their stance of "One Farm, One Cheese," and churn out an Everything Bagel Tarentaise?
Tweet

Now I want to try Tarentaise! This is such a wonderful recap of your farm visit - thanks so much for sharing!

Thanks for coming by to Cabot Visitors Center. Yes, this is the creamery and visitors center so you wouldn't see cows here! But you can see the cows of the 1,200 family farms that own Cabot (and all their cows) are throughout New England and New York - or here online! https://www.cabotcheese.coop/our-farm-families

We're so glad you stopped by, and we hope you had a wonderful VT visit!