Frosty weather has descended upon central Pennsylvania, so our house was in need of a winter warm-up.  I spotted a recipe for a Tourtiere du Shack in the Au Pied du Cochon Sugar Shack cookbook.  At first glance, this recipe looks like a pot pie gone ballistic.  And that's pretty much was this dish is; a tourtiere is a name for a Quebec cooking vessel, but now is more of a generic name for a meat pie covered in a crust.
A recipe like this is a perfect example of why I love Martin Picard's recipes; he takes a simple recipe and makes it completely over-the-top.  Granted, some of his recipes can be pretty complicated, but this one is just a simple savory pie with a last-minute show-stopping garnish. 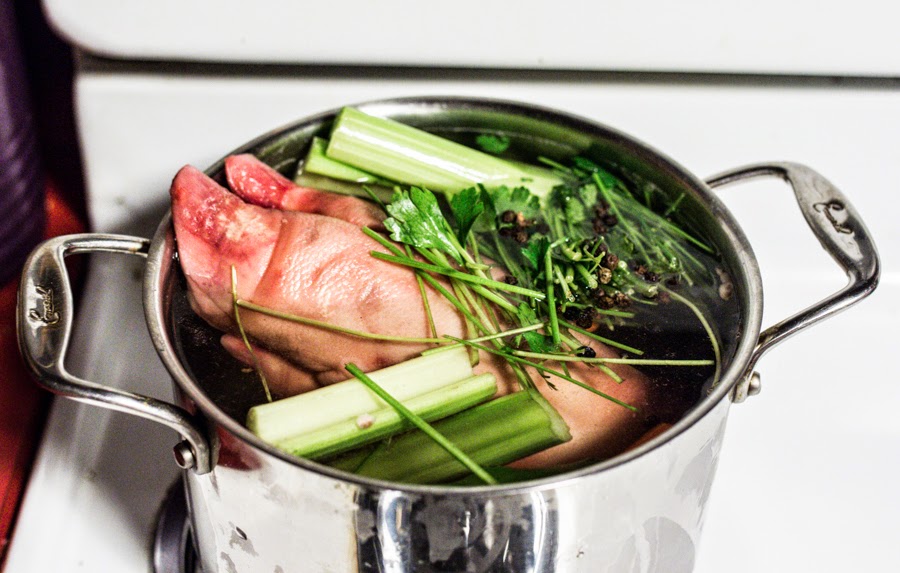 The filling of the pie is pretty simple: saute bacon, then onions, then button mushrooms, then some lovely ground Berkshire pork from North Woods Ranch, and then a shredded potato.  To moisten the filling, I added the gelatinous stock from a Berkshire pig's foot.  This took the longest amount of time, as the trotter needs a long time to break down the skin and collagen.  But one large (2lb) pig foot will provide you with plenty of excess trotter stock to use in future recipes.  Some garlic, thyme, and black pepper completed the seasoning for the filling. 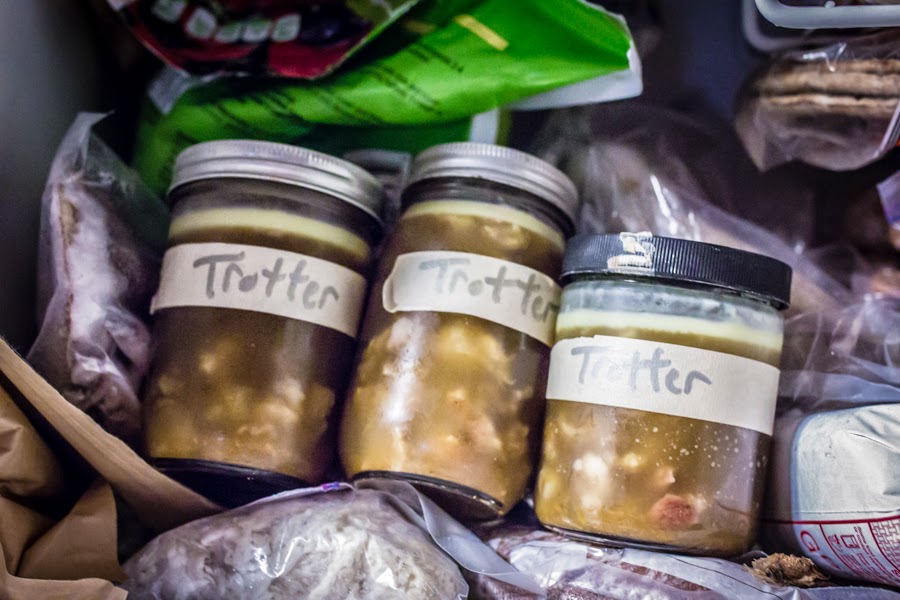 Mixed together, this filling gets loaded into a pie crust, covered with the top crust, and brushed with egg.  Baked for an hour until golden brown and bubbling.  Now, at this point, the Tourtiere looks and smells awesome.  But this is where Martin turns the volume up to 11.  Take the pie out of the oven, and slice off a big circle of the top crust.  Use your largest spatula to lift the top off the pie in one large round.

This is where things really get intense.  Take a small wheel of stinky cheese and cut off the top and bottom rind.  I used a small wheel of Munster d'Alsace.  Leave the rind on the sides of the cheese to act like a girdle and keep all the rapidly melting cheese from spilling out.  Place the cheese in the center of the piping-hot tourtiere, give it a few turns of the pepper mill, then load on the toppings.
Toppings?  Yup!  Saute up some small cubes of potato, a few ounces of foie gras, and plenty of fresh parsley.  Load all that up on top of the cheese and put the tourtiere back in the oven to melt the cheese.  Now, if that sounds crazy, I actually scaled back Martin's suggested toppings, which included the potato and foie gras, but also sweetbreads, brains, more bacon, and arugula.
The result is a pie just spilling out with goodness.  Crispy crust, warm savory center, gooey cheese melting over everything, and all the delicious little nuggets added at the last minute.  It's totally extravagant, but also simple.  All he did was cut the top off and add extra garnishes to give it this overflowing appearance.  You could do the same thing with anything on hand.  A chicken pot pie garnished with cheese curds and cubes of sauteed ham.  Or go cajun with crawfish tails and andouille sausage.  For the holidays, you could do a venison meat pie topped with chestnuts, cubes of roasted butternut squash and red currant sauce.  A recipe like this really leads itself to lots of imagination and personalization on the cook's part.
SHARE SHARE SHARE