To ring in the official start of October, I decided to begin my meat curing for the fall.  October had other plans, however, and we've had 78-80 F temps during the day, which makes it feel distinctly un-Autumn-like.  But no matter. 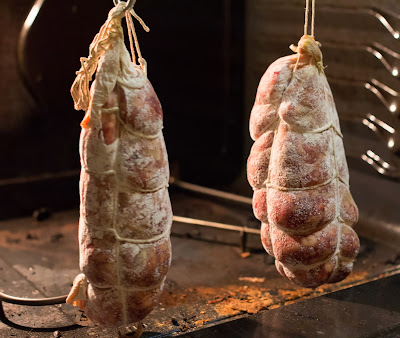 I considered making a smaller salami to start, but I went with a large diameter salami packed into a 4" beef bung instead.  I had some small salami to share last Thanksgiving and Christmas, but I think presenting one of these will really be a show-stopper.  As the large diameter takes 2-3 months to cure, I wanted to start them early.

Although I've used their meat in the past as a component of my salami, this is the first time I've made a salami completely out of the Berkshire hogs from North Woods Ranch.  I kept one salami very simple, with just a bit of black pepper and garlic to act as my "control," while the other salami was flavored with black truffle salt (something Carla has been hinting at wanted for some time now).  I need to attach the name/date tags to the salami, but once your nose gets within a foot of the truffled salami, it's pretty evident which is which.

Stuffed into beef bungs, each salami weighs just a shade over 3 lbs.  The casing were inoculated with Penicillium nalgiovense to produce that nice white mold I like so much (and to help regulate the moisture loss of the salami over time).  You can see the mold just begining to take hold in the photo, as the salami incubate in my oven.  Leaving the oven light on helps to keep the meat warm, which helps the curing cultures (T-SPX cultures) to take hold and get the salami to a safe pH.  After another day of incubating, my little porky bambinos will go into a cooler chamber to cure and age.
SHARE SHARE SHARE