Every time I taste this Dandelion honey the finish is like a mouthful of sulfurous water.  This particular brand is from Italy, where even the manufacturer's website describes it as "The nose is pungent sulfur, ammonia and milky, with hints of wet hay, aromatic root and cheese crust. The palate is medium sweet, vanilla and a delicate tinge of chamomile in the final." 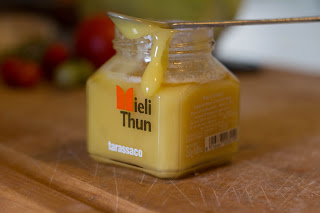 So saying you should eat a honey that tastes like sulfur is going to be a hard sell.  It's certainly an oddity - sweet honey with a big wash of funky sulfur.  It doesn't sting to eat or taste sour...it just seems odd.  Reading on beekeeper forums, I've heard that star aster honey can have a similar funkiness, but by letting the honey "age" for a few months diminishes the odor.  I don't know if the compounds break down or oxidize or what, but that bit of advice appeared a few times.  But other than that, I haven't found a ton of information on honey tasting like this.  But considering how sharp and bitter dandelion greens can be, perhaps this aggressive flavor isn't surprising?

But aside from a culinary curiosity, the question remains; "what do I do with this jar?"  It seems to clash with fruit and I don't want to try it in tea or yogurt.  I've been on something of a fermenting kick this month, so I thought, "what if I made this quirky honey into a honey wine?"

So we'll see what happens.