As a "folksy" drink, it's actually been something of a challenge to get a reliable root beer recipe.  I've found countless recipes for home made ginger ale, but a lot of root beer recipes just recommend using a liquid concentrate for "home brewed" root beer.  Although just mixing in a bottle of flavoring and sugar seems more like making Kool Aid than a real homemade drink.

I think a big part of the trouble with home brewed root beer is that it's hard to lay your hands on the ingredients.  You can buy ginger at any grocery store for ginger ale, or lemons for lemonade, but root beer is an odd mix of eclectic and hotly-argued ingredients.  Some people say you just need the (confusingly similar sounding) sassafras root and sarsaparilla root, mixed with sugar and yeast, while others recommend adding things like chopped fresh ginger, birch bark, wintergreen oil, vanilla, licorice root, molasses or star anise. 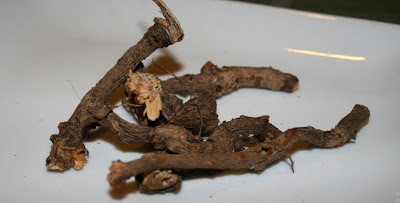 To add to the confusion, some of these herbs are banned by the FDA for human consumption in commercial foods.  Like the star of the show - Sassafras.  The active compound in sassafras is "safrole," which can be concentrated and distilled into an oil.  The FDA found this causes cancer in lab rats, although some people say if you're drinking the 10 liters of root beer daily that would be the human equivalent to the rat dosage, then chances are you're already on a downward slope.  To make matters more complicated, most sassafras in North America produces low amounts of safrole, unlike the sassafras grown in the warm climates of South America or Asia, which is rich with safrole.  Although then you still need to steam it and distill it to get any kind of concentrated strength.  So that makes me wonder, "if I could find some local sassafras, it probably would be ok to brew into a tea," as it doesn't sound like the plants here in Pennsylvania would even be producing anything close to carcinogenic.

Slapping one more layer of complexity on this is that while some herbal shops do sells sassafras, it's the bark (the leaves are used to make file powder), and not the actual roots.  While some people say they can be used interchangeably, some say the bark doesn't deliver the same root beer flavor as sassafras root.  So with my head thoroughly overwhelmed with online hearsay and out-of-print cook books, I decided to hold off on the root beer.

Then in a moment of serendipity, a lady at the local farmer's market was selling sassafras root as a "Spring Tonic," along with her pork and vegetables.

We have sassafras you may dig up.

This is such a great post -- going into the complexity of something like sassafras. To rephrase the Culinary Pen, there are far too many food writers who are the equivalent of "Kool Aid."

But not the Culinary Pen who is educational, funny and hip.

@ Baroness
-That would be great! I forgot you're experts when it comes to PA trees, I should have checked in with you first. I read about digging up burdock, too...it seems like a major chore to get that taproot out.

@TGD
- Thanks so much for the comment! The details are what make things like this interesting for me.