In flipping through a cook book on the American Heartland, I came across a full page photo of a county fair.  Smack in the center was an Amish-esque woman selling homemade preserves.  One sign said "corn cob jelly." 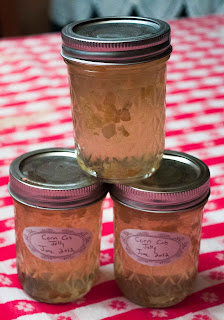 There was no recipe for it, it was just part of the scenery of a classic 1960's county fair.  So I went a'Googlin for answers.  The first website I came up with, Chickens in the Road, is perfect if you want to make your own.  The author remarks that this was something our ancestors did as a way to squeeze the worth out of every product of the farmland.  I had heard cobs were good for scrubbing pots and smoking bacon, but not setting a jam.  But here it was!  Simply enough, you boil corn cobs to extract any residual sugar/nutrients/flavor, then make a simple jelly of sugar, lemon juice and pectin and boil it down until it sets (after fishing out the boiled-cobs...you don't eat those). 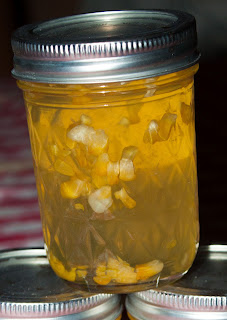 The resulting jelly is a light straw-gold, with a sweet, totally non-vegetable aroma and taste.  It has a nice light sweet corn flavor to it, but is more of a plain, sweet jelly than a corn jam or something.  I went with the authors recommendation and did not strain the small kernels and corn particles out, as I think it looks quite charming.  Plus, it acts as a reminder of the humble source of this jelly.

Corn cob jelly is certainly a fun, and old fashioned, preserve to play with, but the more I think about it, the more I doubt its pioneering origins.  Sugar was not cheap in the country for a long time.  Sure, England has a good trade going with their Caribbean sugar plantations and domestic beet sugar refineries, but that didn't make for sugar cheap in the colonies.  Especially to dirt poor farmers in the Midwest.  I can't find a ton of info on this peculiar jelly, but I have a sinking suspicion that it's a bit newer than it sound.  Like how that old fashioned Italian dish, penne with vodka sauce, was invented in the 1970's as part of an American promotion to sell more vodka.   Not to detract from this charming little jelly, but it does make me wonder....
SHARE SHARE SHARE