Extra Virginity is a book by Tom Mueller that explores both the history, current market and cultural climate around olive oil. Its main focus is on the adulteration of olive oil, again both historically and in modern times, whether by labeling Moroccan olive oil as Italian, or refining and deodorizing seed oils from 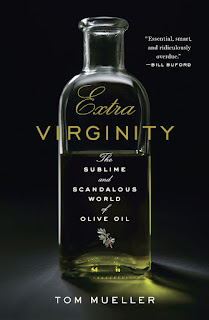 North Africa and labeling them as extra virgin olive oil. I hadn't heard about this book before, as it was actually a gift from Mike and Becca, but I'm very glad to have read it.

While reading the book, I kept thinking back to my own experiences buying and selling olive oil. Extra Virginity is a very engaging book with a lot of fascinating and bizarre interviews with people at all levels of the olive oil industry. But it also has a lot of good solid science in it. Science, or at least some level of grading, is something that I think that's seriously lacking among olive oil professionals and consumers. More often than not, I dig up totally incorrect and almost superstitious beliefs talking about olive oil than any other specialty food.

For example, a few years ago a man was presenting me with an olive oil from his cousin's grove in Sicily. His family had always brought the oil home to the U.S. after visiting Sicily, but then he was trying to bring over a larger quantity here and set himself up as a distributor. He kept going on about how great the oil was, and then told me, "Some people think the only way to judge good extra virgin oil is to rub it through your hands, but really, you can know everything about an oil just by the color."

I'm not sure what I found more confusing me, the vague idea that he might want me to lather up in oil, or that the best way to judge an oil is by its color. Olives, and their oil, come in all types of colors, from pale gold to pine green, and while the color is something to appreciate, it doesn't make or break an oil. This same salesmen also told me that he chose the bottle for the oil because it looked the nicest in a windowsill. Although I kept quiet about the color thing, I had to ask him if he knew sunlight was about the worst thing for oil, like keeping butter in the sun. He looked at me like I was sprouting two heads, at which point I think we both decided this relationship wasn't working out.

So, digression aside, this is a really worth-while book, not just on olive oil, but on how little transparency these is in the food market. I'm really hoping this book helps to push the discussion for better information and labeling on food. I find it incredibly frustrating when I look at a bag of food at the store and it just says "Distributed by so-and-so, USA." But the distributor isn't where the food is grown, just where it's packed. Or how when my boss when to Argentina and they said their biggest client for unwashed, stem-on raisins was California, and their biggest client for unwashed, ungraded peanuts was Virginia. Once in the states, the food is cleaned, sorted, and processed and labeled "Product of California" and "Product of Virginia."

Stuff like this just has me itching for a USDA loan to get a bit of property out in the country and keep a bit more control over my family's food. Although growing bananas in Pennsylvania might be a bit tricky.
SHARE SHARE SHARE

Interesting about the lack of labeling. That's one of the reasons that I like going to the farmers' market and get to know some of the local growers. Of course, I'm not aware of any olives grown in Ohio!