My mom gave me a copy of Serious Pig, by John Thorne, and I'm loving it. The first half of the novel (really a collection of essays) recounts his youth growing up in Maine, fleshed out with his experiences and observations on Maine cooking after returning there years later. One chapter in particular stood out, which focused solely on Maine's passion for beans. Really, I had no idea. 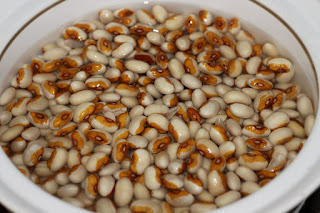 But Thorne's explanation makes sense, as he describes the dish as one deeply rooted in the Maine psyche, when dried beans were one of the few consistently available foods in the Maine woods. So these homesteader recipes became family recipes, which continued as home garden crops, only slightly competing against potatoes as the Maine starch of choice. What surprised me the most was how Thorne, and the people he spoke to, were so specific on the best breed of bean to use in baked beans. It seems like the majority prefers Steuben yellow eyes, while the radicals stick to cattle beans.

I've always seen baked beans as a sticky-sweet dish of tiny white beans swimming in brown sugar and tomato sauce. But here they are, using heirloom beans! Usually my baked beans are just drained and tossed in either olive oil with herbs or chile paste and meat sauce. Thorne is clear, however, that Maine bean enthusiasts keep the bean front and center, with a very gentle hand on the spices (if any at all). It almost sounded like an Italian explaining that the noodles should be the focus of a pasta dish, not a seasoned red sauce. 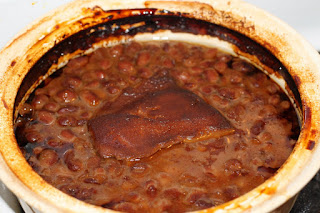 I had to try it. Well, technically I had to try it twice, since I had to try it once with Steuben yellow eyes and one with cattle beans. The recipe was classic camp cooking: simple and sparse, but with an aura of delicious promise. Bake the beans till tender, then add 1/4 C molasses, 2 tablespoons dark rum, 1 tsp mustard powder, then squeeze a generous block of salt pork or bacon into the middle of the pot. Cook for a few more hours until the beans are richly seasoned and the cooking liquid has evaporated into a thick, bean-coating sauce.

And they're delicious. They have the same flavor profile as a can of baked beans, but with a unusual depth and richness. But they also tasted lighter than the canned equivalent. Gone is the thick, candy-like sauce of ketchup and sugar shellacked over each bean. Instead there's a slight smokey, savory taste where the pork fat and molasses join into one. The mustard and rum are hidden in the background, but without them I doubt the flavor would be as smooth and rounded.
SHARE SHARE SHARE