Last week Carla invited her colleague, Andrea, and her husband, Andreas, over for dinner. Along with bringing a delicious Key Lime Pie, they also brought me cheese! They're both from Cyprus, which makes an amazing cheese called halloumi. Halloumi is a semi-hard cheese that's had the curd worked and kneaded until it's firm and dense. What's remarkable about halloumi is that it will not melt. This might sound like a bad thing, but it gives halloumi the ability to be grilled, fried, or just seared in a hot pan. Think about making a grilled cheese, when the cheese runs out between the bread and fries in the pan, creating a crisp, crackling crunch of cheese crust. That's what halloumi is like. 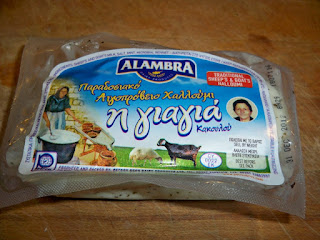 But here's what's amazing -- they actually brought this from their family home in Cyprus! And it was a blend of goat and sheep's milk, while I've only seen sheep's milk here in the states. Andreas said this brand of halloumi is actually made in his home village according to the owner's grandmother's recipe. He also gave me the advice to rinse the halloumi before eating, which will help minimize the salty, feta-like tang of the cheese. I've never tried that before, but it really did help. We just pan fried the halloumi and had it on pita bread with an eggplant caponata I made with my mom. It was simple, delicious, and satisfying. You can really taste the slight lemony flavor of the goat's milk, which was a nice change from the usual flavor of sheep's milk. 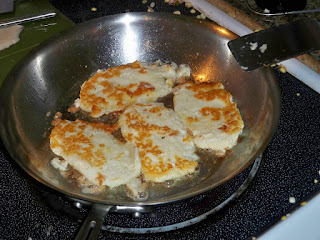 I'd love to get this cheese again, but Andreas said he's never seen it here in the U.S. He believes it's because most halloumi is exported by a trade organization that controls what "real" halloumi is. 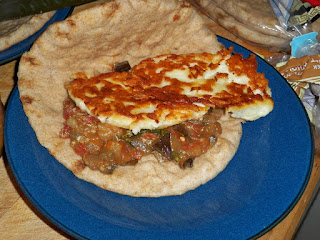 This created a big riff between producers who sourced their milk from cows and goats, as they would make halloumi from the milk of animals they raised. So it was a big to-do as different creameries argued for their own recipe and pushed to protect their personal interests. Now it sounds like several varieties of traditional halloumi are still made, but only "approved" sheep milk brands are exported. Sometimes you forget the politics behind everything, even cheese.
SHARE SHARE SHARE

Hey Nick!!! Thanks for making me famous. I am glad you like the halloumi... Now I am craving some!!!!
Although, I have to clarify one thing... What I said is that in an effort to patent the recipe within the EU, there was a large dispute among cow, goat and sheep farmers on the percentages the real recipe has. Now, I am not sure if the halloumi I gave you can be exported as I have seen only halloumi from a union of farmers here in the US. I haven't seen anything else.