So in a few weeks the county fair will be in full swing. Unfortunately the county we just moved to doesn't have a category for homebrewed beer, so I need to try my luck on baked goods and pastry alone. Along with entering yeast bread and zucchini bread, I'm also entering an apple pie. While apple pie isn't my favorite pie, it's at least in the pie top five, behind blackberry, pecan, and peach. Apple moves back and forth with Shoefly, while Key Lime keeps a tight hold on the #6 spot. 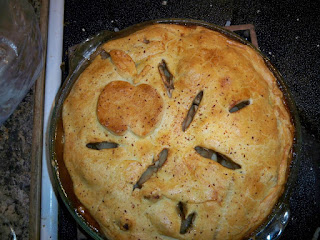 So how do I make a really, really good apple pie? And I don't mean that rhetorically, as I'm open to suggestions. I thought about adding complementary flavors, but I've settled on really trying to pack a ton of apple-intensity into one pie. I started with granny smith apples, because they hold up well to cooking and add a tart, sharp apple flavor. In an old apple chutney recipe they mentioned using boiled cider, which is cider cooked down into a thick syrup. Normally it takes 7 gallons of cider to make one gallon of boiled cider. But that's really hard to find outside of New England. But I did find some PA Dutch apple butter, which contains boiled cider, along with lots of cooked down apples. 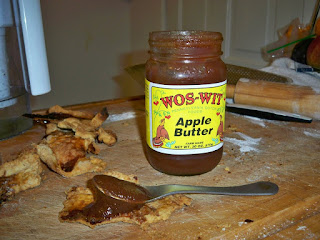 Instead of lemon juice, I used apple cider vinegar, and swapped out the white sugar for earthier, more robust brown sugar. And no cinnamon, just vanilla extract. The pie came out very tasty, although Carla spotted a slight tingly bite on the finish, which we're guessing came from the cider vinegar. So maybe back to lemon juice. Perhaps some more nutmeg, though.

I do want to try another test-recipe, as I had the idea to soak diced dried apples in apple cider, then mix them in with the fresh apples. My hope is they add a bit of extra flavor, along with a hearty texture to the filling. But then they might just be chewy little distractions of unhappiness. Updates to follow!
SHARE SHARE SHARE