I was talking to a French confectioner, who was lamenting his struggle to break into the US market. "The tastes are totally different here," he explained. "Anise is my best selling item, but here no one will even try it." Which is true, as my wife Carla politely took a piece of anise-flavored candy that she knew she wouldn't like.

I don't really understand it myself. I really like the flavor of black licorice, but I have never met another person (minus my boss, who's from Northern England) who enjoys it as much as I do. It's much milder than something like cola, with a soothing sweetness that freshens your entire palate. My boss called them "Spanish sticks" growing up, and could buy licorice root as a candy to chew on after Sunday dinner. 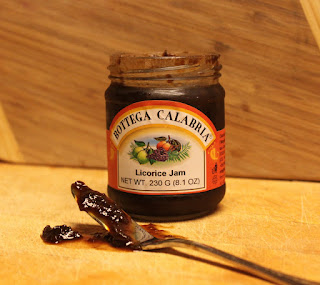 As with many things, when you like something and it's hard to find, you can get a bit obsessive. So when I saw this jar of licorice jam, I knew I had to get a jar. Upon spooning it out, the jam is thick, pulpy, and black, smelling wonderfully of licorice and sugar. The base of this jam is basically an apple jelly, producing the pectin needed to set the gel, with ground licorice root cooked in. 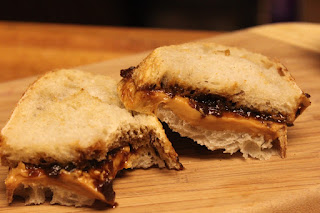 I first tried it on its own, before treating it like any other jam; the PB&J test. As a sandwich, the licorice was nice, and it was good to spread the intense flavor out with a fatty medium like peanut butter. But I don't think the peanut n' licorice combo was perfect, as peanuts have a very distinct and not very cooperative flavor, at least when playing with licorice. But certain sheep's milk cheeses have a slightly sweet, almost anise flavor to them. Perhaps a licorice and manchego melt? 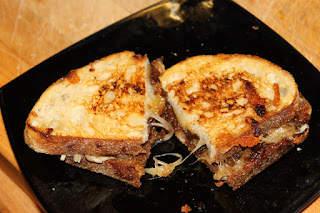 This worked much better. The gooey, sheepy cheese was perfect as a foil for tasting that odd, beguiling sweetness of licorice. And who doesn't like a grilled cheese to chase down a PB&J?
SHARE SHARE SHARE

I am from England l love licorice and l came across this while wondering if there was such a thing as licorice jelly ir jam. I must try to make some