Last Saturday's cheese plate reinvigorated my appreciation of Switzerland's bone-hard mountain cheese, Sbrinz. Every time I've tried it, Sbrinz has been exceptional. But then this cheese is coming from the hand-picked selections of Switzerland's foremost affineur, Rolf Beeler. Beeler himself states that Sbrinz is not named after a place of origin, like most cheeses and wines, but after the trade route that took the cheese to market in Italy. But once the Roman's got tired of lugging Sbrinz over the alps, they decided to make their own version of Sbrinz, calling it Parmigiano Reggiano. So they say. 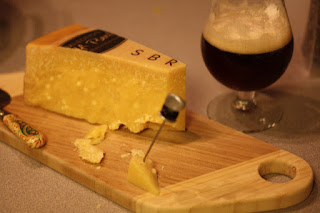 I understand that Sbrinz has the advantage over Parm of being made from whole milk (not skim), so it has more flavor-holding butterfat. This would also explain why Sbrinz can age for 5-8 years gracefully, while many examples of Parm take on a sour, butyric flavor at 3 years and often become hollow and faded after 5 years. In fact, the only super-aged Parm I've really loved comes from the Vacche Rosse "red cow," which is famed for its butterfat rich milk. 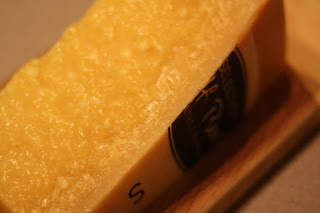 And like everything else I love, I want to try to make my own. I bought Debra Amrein-Boyes' cheesemaking book as it was the only one I could find with a recipe for Sbrinz in it. In comparing the recipes for Sbrinz and Parm, they're modestly similar, but the details have unique differences. As mentioned before, Sbrinz starts with whole milk while Parm starts with skimmed. Sbrinz is ripened for 90 minutes, Parm for 45. Sbrinz is heated to 130 F, Parm to 124 F. Sbrinz also gets a shorter time in the brine bath.

The biggest difference is that the newly made wheel of Sbrinz is first aged at 65 F for 4-6 weeks, then aged at 50 F for the next several months/years. Parm goes right into the 50 F aging state. It's said that during this warming period, excess butterfat that cannot be held in the cheese's form will "sweat off" the surface of the cheese. But that higher initial aging temperature should also give the Sbrinz a boost of flavor development, I believe, while Parm's development is retarded by the cold temps.

So I think this will be my goal for the summer. I would like to try to make one smaller Sbrinz wheel (3-4 lbs) as a "tester" to try after 6 months or so. That would be just to practice the technique. Then, in June, when the cow's milk is at its richest from the fresh summer grass, I'll try a 6 pound wheel to age for a year. If that seems like I'm moving in the right direction, I'll make another wheel next summer and try to push it for 18-24 months.
SHARE SHARE SHARE