Sunday I killed my first chicken. There is a farm stand a few miles from our house that sells 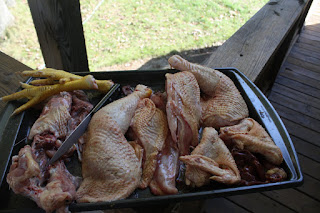 vegetables, but also offers beef shares in the spring. They've always had lots of chickens running around, and last week I asked if they ever sell them. "Sure. Do you want us to kill it here, or are you taking it home alive?" The look on Carla's face told me that we wouldn't be bringing a chicky home that day.

A week later I went back to the farm and spoke to "the chicken lady," which is what the other employees call the 30-ish woman who looks like Tina Fey. She said most of her customers are Hispanic families who let the kids fish out a chicken from the barn as an activity, then the adults take the chicken home to kill and clean. The chicken lady recommended cutting off the chicken's head, as the heart would pump out the blood and leave the flesh (relatively) blood free. Although my idol, Hugh Fearnley-Wittenstal of the River Cottage, recommended breaking the bird's neck, she said that makes the blood congeal in the flesh and body cavity.

At home, Carla had three gallons of water reaching a boil. I brought the chicken home in a cardboard box. Previously, a friend named Jarret had explained to me that a chicken will get calm if you hold it upside down by its feet for a few seconds. As strange as this sounded, it worked. I tied it upside down by its feet from a post in the yard. Holding its head downward, I used a knife to cut its throat, but not to completely remove the head. This is considered a very humane way of killing a chicken, as it severs the major arteries delivering blood to the brain.

I knew the bird would spasm "like a chicken with its head cut off," so I kept hold of the head to keep the blood from spraying everywhere. The chicken didn't spasm at all, it was very calm the entire way through. After almost all of the blood had come out, the bird started flapping like crazy. This was actually a little frightening, as the bird became frantic 15-20 seconds after cutting. I held it firm as it kept beating its wings for the next minute. After that I just held on to the head, worried that if I poked it the bird would start flapping again. At this level of commitment, I wasn't going to let dinner fly away.

When I was sure the bird was quiet, I dunked it head-first into the pot of boiled water. A quick 45-60 second dunk would help loosen the feathers. Hanging the blanched bird back on the post, cleaning went very fast. The feathers came our quickly and easily. Then I hosed the bird down and set it on an outside table to clean. I took my time making the slit into the body cavity, so as not to puncture the intestine. After several shallow slashes, I made a small hole to gently pull out the internal organs. Then I cut 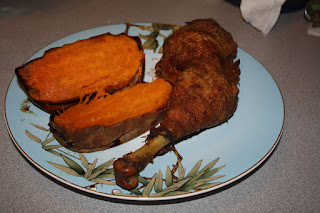 off the head and fished out the gizzard from where it rested by the collar bone. This didn't go so smoothly, and it spilled out a mess of chewed corn and pebbles.

At this stage, I had a chicken like you would buy it cleaned in the store (except with feet). I cut off the feet and quartered up the bird into legs and breasts. While the grill was heating up, I salted the chicken and chilled the meat in the refrigerator. I grilled the feet and carcass first, to make a soup stock. Once the feet were burned and blackened, the tough skin easily flaked off. The cleaned feet act like pig's feet, thickening and flavoring broth.

The meat itself was very flavorful, dense, with a not-unpleasant chew to it. The fat was a beautiful golden yellow, like fresh butter. The biggest revelation was the skin. I always thought chicken skin could taste good, if crisped properly, but this skin was amazing. It was dark, thick, and crispy as any crackling. The first bite made me realize the religious fervor that a crispy shell of snap-ably crisp skin induces in poultry lovers.
SHARE SHARE SHARE

Riveting post on killing and preparing chicken. This is food in real-life; and Culinary Pen readers always learn from and through this blog.

Perhaps a bit unnerving, but always outstanding and authentic.

Thanks very much! This wasn't a "fun" activity for me, but an important job. I felt that I would be doing the best job by killing and cleaning the chicken quickly and efficiently. That would be the most humane, along with supporting local farms and ethical animal husbandry.

Thanks again for the support.