This is the first blue cheese I've ever attempted. Right now it's still in its larval stage, before the blue molding has really begun to bloom. It's based on a recipe for Stilton, as I really like the dense, fudgey texture of Stilton, even though it can be a bit 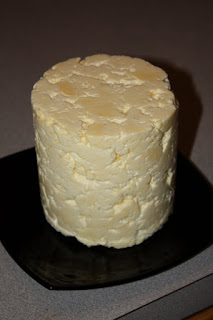 pungent at times. In July I was talking with a British cheese importer, who told me the best Stilton is always hand-ladled into its draining molds. Ladling a cheese into its molds is slow work that requires a lot of patience. Once the curd is set by the rennet, you take shallow scoops of the jiggly curd and ladle them into the mold to drain. This is different from the process of cutting all the curd into small pieces in the pot, then stirring them to agitate the whey out. The cheese sloooooooowly drains, gently dripping out the whey, and naturally shrinks over the course of several hours.

After that the cheese is broken into large chunks and turned several times to facilitate the drying off of the whey. Although 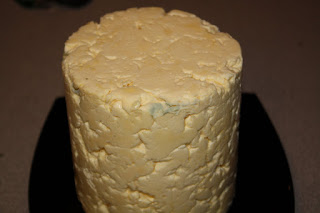 that may sound counter-intuitive to what I just said above, it's actually a much gentler process that cutting and stirring in the pot. It's like the difference between chopping vegetables by hand versus throwing them into a blender.

So that's where we are now. The cheese is in its final mold, still drying. I flip it a few times a day and the curds slowly settle down. While it'll still have an open-texture, the cheese will shrink a bit more over the next 2-3 days of flipping. Then after a week or so, once I see some blue mold on the outside, I will pierce the cheese with a sterile needle to open the insides to air. That'll allow the mold to bloom on the inside with the characteristic veining you'd expect in a Stilton. Then I wait for the cheese to reach its delicious peak.
SHARE SHARE SHARE