So here it is, about five months later from when I first made my raw milk colby. It looks a lot different from those initial pictures, like 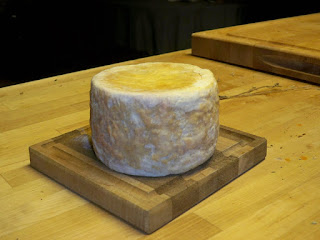 comparing a fresh grape with a forgotten raisin that went through the wash. Twice.
As a brief recap, I wanted to try to make a more artisanal version of colby; that weird, squishy cheese with the orange cow-print paste. So I made one out of raw milk, cloth-bound it, and aged it in my cheese cave. Over time it gently shrunk and wrinkled, but never got much mold on the rind. I wonder if bacteria didn't have much interest in the colby because I had washed away a lot of the lactose milk sugars in treating the cheese curds (Colby is a washed curd cheese, like gouda. Removing milk sugars creates a milder cheese and prevents them from becoming lactic acid). So perhaps I inadvertently removed most of the 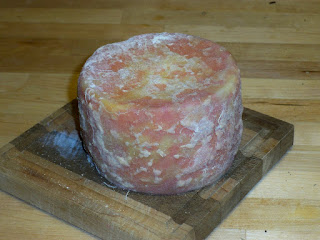 food source, which would explain the lack of molds on the rind.
The first photo is of the colby with its wrapping still intact. After that I peeled it off to expose the real surface of the cheese. The white spots are salt deposits, as salt inside the cheese migrates to the more humid surface. You can also notice the odd pinkish hue the cheese took on from the original orange colored-sections
The flavor reminded me of an aged gouda, but with a 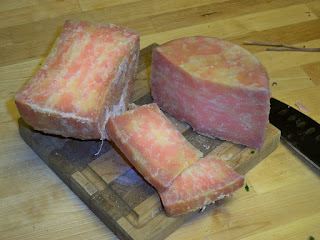 little grassy flavor from the raw milk. But very mild overall, with a dry texture. If I was going to compare it to another cheese, it would be close to Vella's Dry Jack, except without the rub of black pepper and cocoa powder they use. It's an interesting cheese to try, but I'm not sure if it's something I'd go back and work on. For the same amount of effort I think I would enjoy a clothbound cheddar even more.
SHARE SHARE SHARE