Last weekend Zeno's had another beer tasting, this one focused solely on dark beer. As open-ended as a description like "dark beer" is, deep in my heart I know it is my favorite type of beer. No matter what, I can count on some roasty, toasted flavors in a dark beer. It just seems more fundamentally nourishing than a 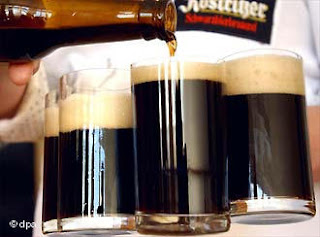 glass of canary-hued pilsner. Guinness was my favorite beer until I discovered the wonders of craft brewing. Then I found the delicious heaven that is a pint of Sam Smith's Taddy Porter. Some years later, Sam Smith was put to the test when my brother Mike poured me a glass of Bell's Expedition Stout, a stout blacker than Danzig's soul. I've worked with creosote and even that was lighter and thinner in consistency than Expedition Stout.

Anyway, here are my tasting notes from the event:

Bell's Java Stout - Coffee infused stout from one of my favorite Midwestern brewers. This was all-coffee, putting the brewing style "coffee stout" in overdrive. The problem was that the coffee was just too overwhelming to let the beer shine through. It ended up tasting a bit like over-brewed coffee.

Victory Storm King - An imperial stout from Pennsylvania that tastes like a dark IPA. A moderately thick beer with loads of piny hops in the nose and on the palate.

Rogue Mocha Porter - Opens with a cocoa aroma, following through by laying down a bed of hops, then rounding out with a chocolaty, roasted finish. Very well balanced beer from the West Coast genius that is Rogue.

Brooklyn Black Ops - Possibly the most fascinating beer I tried. The Brooklyn Brewery ages this stout in old bourbon casks, imparting a hard-to-miss bourbon aroma when you get a whiff of the beer. Dark, well-defined, and almost heady. The finish was slightly astringent, which was a bit off-putting. After the tasting I read that this beer is bottled flat, then each bottle is inoculated with a champagne yeast-strain to carbonate in the bottle. Champagne yeast are very hardy and can consume more sugars than most beer yeasts. I wonder if they basically chewed through every gram of sugar in the bottle, leaving a dry, almost austere finish?

Unibroue Terrible - A Belgian dark ale, swimming with sweet, malty flavors. Caramel leads into a brief flirtation with hops, which get promptly washed away with a finish of dark honey.

Duck Rabbit Milk Stout - Beer yeast cannot digest milk sugars, so adding milk sugars ensures a sweeter beer. The Duck Rabbit was sweet, like cappuccino or creme brulee. Mild hopping ensures nothing gets between you and the malts.

Anchor Porter - Another West coast beer. Much smoother than the Sierra, slightly tasting of scotch.

Harviestoun Old Engine Oil - Brewed in Scotland. This competes with the Black Ops as one of the more fascinating beers at the tasting, but I think this bottle is an outlier. I got a distinct sourness/horse-blanket flavor hiding under the aroma of toffee and roasted malts. I'm not sure if the bottle was "corked" so to speak and had a lambic-like sourness to it, or if my palate was skewed by tasting this beer after several others. Would have liked to known if anyone else picked up a similar flavor, as online reviews describe nothing of the sort.

Kostritzer - A schwarzbier, or dark German lager. Light, with a playful, roasty-toasty finesse on the palate. Smells like it tastes, slightly biscuity and reminiscent of oatmeal porridge.

Nogne-O Porter - Pretty straight-forward porter. Not too dark, with a crisp, flat bitterness. Slightly woody finish. Not sure if I've ever had a Norwegian beer before this one.

Weheinstephaner Korbinian - A German Dopplebock, which was more to my liking than the Kostritzer. Sweet and malty, similar to a Belgian dark ale.