Last night Carla and I attended a class at the Artisanal Cheese Center. We've eaten at the Artisanal Fromagerie and Bistro a few times and have always relished their cheese-centric menu. The 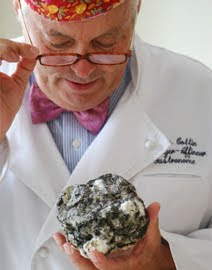 class we took at their corporate office was on fondue, an appropriate seminar for the approaching cold weather. The people at Artisanal were very hospitable, starting the night off with a champagne reception before the class, then ending it with one of their signature cheesecakes. I also got to make a sheep's milk fondue, something I've never tried.

A wonderful evening by itself, the greatest highlight was the conversation we had with the incredibly knowledgeable and unbelievably friendly Dennis Cottin, Artisanal Director of Affinage. We approached him with a question about the cheese Vacherin Mont d'or, and soon found ourselves in a wonderfully engaging conversation for the next twenty minutes or so. Some of the most fascinating points:

- He explained that Vacherin Mont d'or is made with very poor milk. Made in the coldest region of France, this winter cheese gets most of its flavor from the spruce band that wraps around the waist of the camembert-shaped cheese. Take this away and you have a very plain cheese. But with the spruce you are able to make something divine.

- Sheep do not produce milk year round, but only for approximately 6 months of the year, after lambing. The first month is very poor milk and best given just to the lamb. The last month's milk is very fatty and will not create long-lasting cheeses that take well to aging. So you really only have four months of milk for producing your best cheese. It's for this reason some sheep's milk cheeses can be so spotty and prone to infection late in the season.

- He recommended to give aged cheeses a higher humidity than younger ones, such as fresh goat cheeses. Since a fresh cheese will be eaten in a few weeks, it will suffer less from a loss of moisture. But aged cheeses need a much higher humidity to keep their rinds porous and avoid cracking. He put it rather succinctly, "If there aren't puddles of water on my aging room floor, I'm not happy."

- I've seen a range of opinions on the best wood to use for aging cheese, from pronouncements of "only use oak" to denouncements of "never use pine." Dennis explained that what's more important is to know what you want the wood to do, as well as when to harvest it. Pine harvested in the summer will be wet and full of moisture, yeasts, and bacteria that will cause a cheese to go rancid. But pine harvested in winter will be drier and more suitable for cheese aging. He also explained it's important to know how to clean wood, such as how wine makers use sulfates to clean wine barrels.

- He also explained that for Roquefort, only specific trees are used, and only harvested in a particular time of year. They are then aged for three full years before sending it into the caves of Roquefort-sur-Soulzon.

- Lastly, he recommended looking for an old fashioned refrigerator for aging cheese, as many newer models are designed to efficiently blow out the excess humidity I'm working so hard to create.
SHARE SHARE SHARE