Excuse me for being crude for a minute, but I think it really shows the French's love of cheese that they would name a cheese after a horse turd. Most of the classy cheese books on the market translate the cheese crottin as meaning "horse droppings," due it being shaped like a mini-hockey puck. But it's still funny that this is probably one of the most popular shapes of goat cheese available today, in both France and the U.S. While many possibly 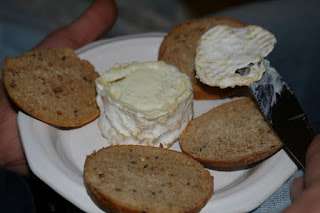 squeamish foods are euphemistically called "sweetbread," "fries," or "maws," the French are so in love with cheese that they name a cheese after a shape that even the hoi polloi could recognize.

Moving on, last weekend was the first time Carla and I cracked open one of the raw milk goat crottins I made. I used a standard chevre culture to give it a crumbly body, coupled with a duo of penicillium candidium and geotrichium candidum. The center was still solid and crumbly, but the crottin had a lucious layer of creamy paste just under the rind. The cheese was ripened for a few weeks with high humidity, which I think is what gave it such a creamy consistency under the rind. But now I've noticed some reddish streaks (of yeast?) on the surface of the cheese, which may be from having the humidity consistently high.

But as a whole, the cheese was a great suscess. It's definetly a goat cheese, but not as strong tasting as an imported chevre. While that might be a selling point for some, I'd actually prefer a bit more of a goaty "bite." Clearly, more testing and tasting is in order.
SHARE SHARE SHARE