I don't really like lagers, as I often find they're too light and dull for me. Granted, I've never worked to seek out prime examples of exceptional lagers, but even the microbrews I've tried never inspire me to the poetic 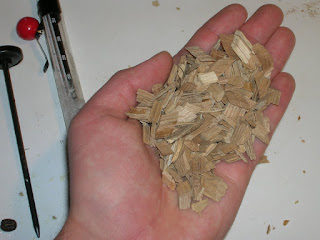 swooning a roasty toasty stout does. In figuring out a beer to brew for summer, I decided to go for a nice IPA. Light, but bracingly bitter, an IPA seemed to be the perfect draught for hot weather.

I used two types of bittering hops, Northern Brewer and Chinook. Both are pretty robust on their own, but I really enjoy an aggressive amount of hops when I'm in the mood for an IPA. The flavoring hops I used was a smaller does of Northern Brewer, then a final 1/2 oz dose of Golding hops for aroma added in the last 5 minutes of boiling the malt.

To make it a bit more interesting, I decided to "oak" the beer, as you would a Chardonnay or other oaky wine. The oak would add another level of flavor to the beer, plus the oak flavor would 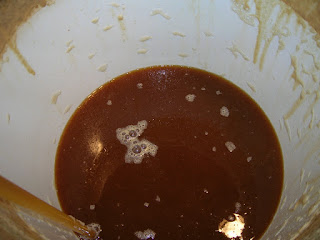 work with the assertive flavor of the generous amount of bittering hops. Not having a 5 gallon oak barrel on hand (I loaned mine to a friend), I used two ounces of toasted American oak chips. Sterilized in a steamer for 5 minutes, I added them to the beer once the primary round fermentation was completed. They've been in for about 2 weeks, but I'd like to give them another two weeks to continue to infuse with the beer.

One snafu with this beer is that it's not really a "pale" ale, but more of a thin brown. I used light malt, so I wonder if the biscuit malt or Belgian aromatic malt is responsible for darkening the beer? Well, the most important thing is that it tastes good! Hopefully I'll find that out in a few weeks. After this, I'm planning on making a coffee-infused stout, then possibly a clone of Rogue's Chipotle Ale, which may make a very nice beer for the August heat.

The specialty malts probably added some color, but usually its just from the extract that darkens during the long boil. One way to lighten the color of extract beers, and improve the hop utilization and bitterness, is to add half the extract at 10 minutes rather than everything at the beginning of the boil.

Also, just to let you know, Belgian aromatic and biscuit malt both need to be mashed to get the most out of them. I use a huge mesh bag and do mini mashes right in my bottling bucket.


Here's a very informative chart that lists what malts need to be mashed and what flavors they have.