Well, it has been a month since I first created my cheese. Despite the initial setbacks, the cheese has survived, and only a little worse for wear. My main concern--once I had actually made the damn thing--was how it would hold up in my modified cheese cave. Basically I'm keeping a 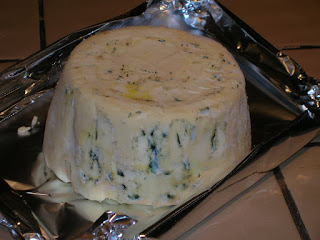 mini-fridge at 50 F and 70-80% humidity to act as my "cave." I'd like it to be a bit more humid, but I'm having a hard time pushing it above 80%. I worried that this might cause the surface to dry out to quickly, sealing in too much moisture in the center and leading to rot.

But as luck would have it, my cheese has emerged in edible shape. It also picked up a range of molds, the bulk of which are harmless blue molds. The only troubling ones are the light patches of black stalks, aptly called "cat hair mold." If widespread, the cheese would be edible, but bitter, so I've been scraping any black spots off and rubbing a dash of olive oil on the surface. In comparison, the blue molds don't bother me. Aside from looking very normal, I've scraped off a few and they're just on the surface -- not eating into the paste of the cheese. 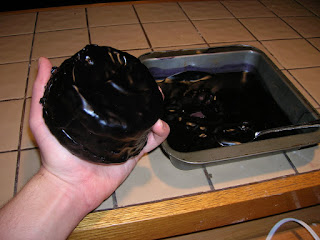 I thought about eating the cheese as is, but I'd like to see it go another month. To control its moisture content, I've enveloped it in a wheel of black wax. Unlike normal wax, cheese wax won't crack or split easily, and peels cleanly off cheese. You can buy it online, or do as I did and just save up all the wax off the cheese you eat. Originally I had a pound of wax, but a co-workers dog ate 8 oz of that. Poor lil' puppy. I guess it just smelled too much like cheese to resist.

But the dog's fine. And to make sure my cheese stays fine, a waxin' I shall go! This cheese will see ya'll in a month!
SHARE SHARE SHARE