While plotting out my garden for spring, I was surprised to find you can actually grow your own goobers! I think I first heard the term "goober" as a child, when my dad would read me the Br'er Rabbit folk tales. Full of southern colloquialisms, one of the stories revolved around the harvest of a goober patch...or "peanuts" as we call them up here. What I didn't realize as a child was that peanuts grow much like potatoes; underground in multifaceted clusters. I suppose this makes it entirely evident why some parts of the world call them "ground nuts." 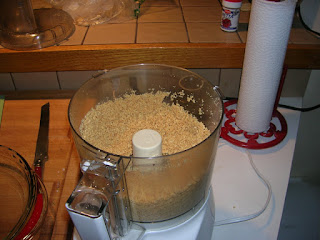 Then I wondered, why grow peanuts when I use them so rarely? And even then, I mostly just munch on them out of the shell. This whim filled me with determination to incorporate peanuts more fully in my culinary endeavors.

So why quiche? Eggs are a beautiful medium for playing off other flavors, from a dash of chocolate for a souffle to tomatoes and spinach for a Florentine omelet. The eggs would give me a good base to incorporate the peanuts 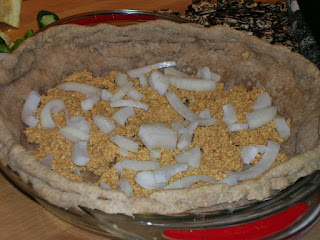 into, then I just needed a few complimentary flavors. Smoked cheddar came to me out of the blue, but I think my percolating subconscious pulled that from my love of smoked almonds and the need to add (at least one) cheese to quiche. To complete the quiche, I added onions, just to push the savory theme, and corn. I think I chose corn because it was the only vegetable that made sense to me at the time. Plus, corn seems pretty southern to me, and okra would be too gummy.

I made my own peanut butter by toasting peanuts, then grinding them into a paste. Thinned out with a bit of peanut oil and enhanced with a dash of salt, I was good to go! I spread a layer of peanut butter down, then sprinkled on the onions and half of the cheddar. At this point I poured over my scrambled egg mix, then tossed on the corn. 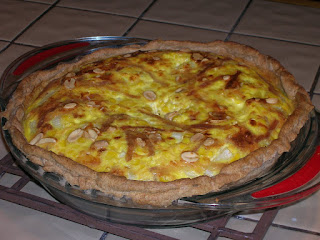 Another handful of cheddar topped everything off, then I sprinkled on a few whole peanuts just to garnish. Baked for about 50 min until puffed and brown, my house was filled with the deliciously dissimilar smells of smokey cheese, corn, and nutty goodness.

The quiche, taste-wise, really did work. I'd never had a combination quite like it, and didn't really have a reference point for it, but both Carla and I agreed we'd happily try it again. I think the nuttiness of the peanuts played off the deep, smokey flavors of the nutty, aged cheddar. The corn itself played along with the other flavors, but didn't especially make itself that pronounced (which may have been a good thing with such dominant flavors). What's next? Peanut blondies sound like a relatively safe bet!
SHARE SHARE SHARE

Wow! What a combination and to think it even tasted good.
Chris