I first saw the recipe for these in a column of Bon Appetit magazine. The idea behind the recipe was that the author loved to make quickbreads (i.e. no yeast, waiting for them to rise, etc), like banana bread, zucchini bread, and the like. Along with breakfast, she found quickbreads equally adapted to serving as hors d'oeurves before cocktails, or sliced in strips over a salad. Now, I'm not familiar with the 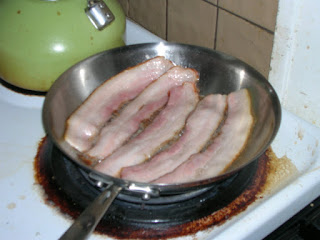 idea of starting a weekend off with a banana muffin in one hand and a lime rickey in the other, so I decided to give this a whirl.

What really surprised me was not that her quickbread contained bacon, but dried pears. I'm guessing this was more to play off the cheddar in the bread, a la "cheese and fruit," but that's just my hunch. Unfortunately, Carla and I ate the last of my dried pears, so I went with a 50/50 blend of dried persimmons and dried apricots. And the bacon? I never run out of bacon! Grab me a skillet and I'll prove you wrong. 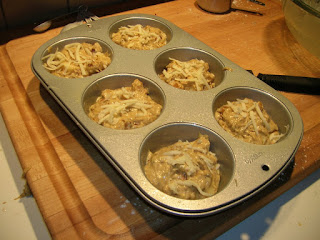 Moving on, I made a quick banana bread batter (although the author doesn't use old, blacked bananas in her recipe, I had them aplenty) and blended this with the dried fruit, chopped bacon, and half-inch nuggets of sharp white cheddar. I also took the liberties of making these into muffins, not a loaf, like the author suggested. So all in all, I didn't really follow her recipe. But it was inspiring! 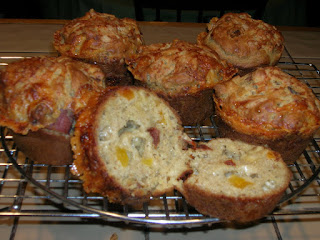 The muffins were delicious, like a county bacon omelet stuffed into a tender muffin. One of my favorite parts was that the cubes of cheese close to the surface melted, then bubbled up to the surface and fried into a crunchy, cheesy crust. The dried fruit was also a much needed sweet/chewy contrast to the salty bacon and cheddar. I imagine this was only helped by the bananas I added, so I think I'd keep then as a component in future adaptations of this recipe.

My next goal is to make this recipe with whole dried figs and Stilton. After that, I was thinking chocolate zucchini muffins with fresh goat cheese, as a nod to Westfield Farm's chocolate goat chevre log. Going back to the original recipe, did I actually try the muffins sliced over a salad? Well, not yet...
SHARE SHARE SHARE