Liver Mill was also my Band's Name in High School 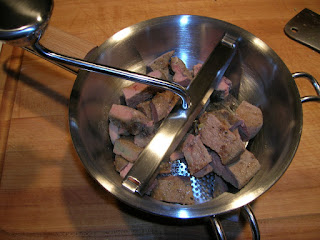 So that first picture is tonight's dinner in the food mill. Didn't turn out quite how I expected. It had been a bit of a long day and I've been trying to reel back my spending to save up for a few items for a while now. So I just stopped by the local grocery store that's on my way home from work. I picked up a lemon, some white mushrooms, and two packets of calves liver on discount. I knew I had four artichokes in the fridge that needed to be used up, along with half a bottle of sauvignon blanc.

I've had good results in cooking liver in the past, aside from the very first time in college, when I bought frozen beef liver and cooked it to chalky oblivion. The idea was to do a traditional Veal Piccata, but with liver, along with artichokes and mushrooms. I peeled and quartered the artichokes, then tossed them in olive oil and baked them for about 15-20 minutes at 375 F. The veal got a bit of salt, white pepper, and some flour. I seared the liver off, cooked it about 3-5 minutes per side. That got moved to a warm plate, then I threw in the mushroom and artichokes. 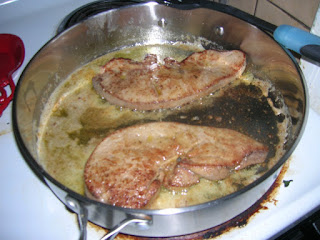 The Piccata elements came in with the zest of a lemon, half a lemon's juice, 1/2 C white wine, parsley, garlic, and oregano (no capers though). This all got stirred up into a pan sauce, then poured over the veal. It looked and smelled good, but the flavor and texture were off. I blame this on the quality of the veal, and myself. The veal's muddy flavor was probably the result of it being old stock (which was why it was on discount), but I also think I seared it too slowly and at too low of a temperature, which made it too firm and slightly chalky in texture.

So, what to do? For someone who parades about with a mantra of using all of an animal and all of its parts, it seemed a bit contradictory to toss this to the bin for my lack of care in cooking. That's why it's in the mill. Perfectly nutritious liver, despite being overcooked, can still make a lovely liver piccata dip. Blended with some brandy, some butter, and a slightly aggressive bit of herbs and garlic, this turned out to be a lovely lunchtime snack. 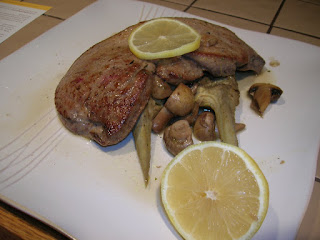 The game plan in the future:
1.) Reserve sale-priced offal for well-cooked applications.