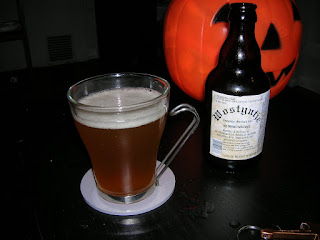 This was the most foul tasting beer I ever gleefully shucked out $5.25 for. Deep in the Belgium beer section, the word "mustard" popped out to me from a label. Brewed by Wostyntie, the Torhout's Mustard Ale amazed, repulsed, and befouled me for the night. The description listed that it was a dark blond Belgium ale, which was right up my alley, made with 90% barley, 10% Munich, two hops (unspecified, but more on the later), dark candy sugar (a typical additive in dark Belgium blonds) and mustard seeds.

The idea of a mustard beer sounded just so unique, plus I figured, "This can't taste awful, otherwise they'd never export it and charge a premium price!" Also, I was sold on the fact that it was in a Duvel-style bottle. I love Duvel, it really is the champagne of beer, not Miller High Life. For one, Duvel actually does has some resemblance to the taste of a nice, bread-crusty, toasty glass of Veuve Clicquot Brut. While absorbing their literature, Duvel talked about how the odd, three-tiered top of their squat bottle helps to increase the carbonation and foaming. So I assumed that this bottle would share some effervescent, yeasty qualities.

Torhout's mustard ale, however, barely poured any foam. It was the color of tan cider, with a slightly sweet aroma. The initial taste was that of a Belgium blond, making me think I had found a small-batch Leffe. Then the pungent mustard flavor washed over me like a squirt of French's Classic Yellow on a burger. That's actually not strong enough. It was like a tablespoon of Colman's Doublefine Mustard Powder mixed into a bottle of Leffe. No hops came through in the overwhelming, obliterwaving mustard gas haze sweeping across my palate. I got a bit of a citrus flavor at the end, but I could not penetrate any further past that.

On a positive note, it was brewed well, I can say that. It was no lack of skill on the brewer's part that filled me with regret and shame as I took that first sip. The combination was just foul. Reading some reviews online, I found some people have very mixed results on this beer. Some could barely taste the mustard, others were slammed to the floor with it. Probably just a result of this being a small-batch crafted beer. Either way, tune in next time for the results of our mayonnaise merlot tasting!
SHARE SHARE SHARE