Pungency has a Place

When I proposed to Carla, I served her a Berthaut Epoisses that was two weeks out of date. It wasn't a mistake, or just an oversight that the cheese was so old. I didn't want to take any 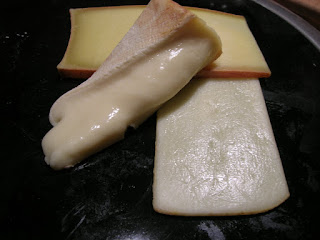 chances that the cheese might not be as gooey and pungent as possible. If you've never tried it, you may take one whiff of Epoisses and decide that you don't like it. Washed in a brandy called Marc de Bourgogne, Epoisses is exceptionally pungent and runny, with a bold, beefy flavor that's not for the faint of palate.

Epoisses is the newest cheese I've been trying to recreate at home, but I'm already brain storming at what recipe I'd like to try next. As you might imagine, not all pungent cheeses are created equal. Some are too salty, some end with a flat note on the taste buds, others just taste the way feet smell. To that end, I brought home three new washed-rind (read: stinky) cheeses for Carla to test out.

The first cheese in the photo is a wedge of Stinking Bishop, made by the U.K. inimitable cheese making genius Charles Martell. Washed in a pear liqueur, Stinking Bishop (named after a species of pear), has a paste that becomes gooey at fridge temperature and absolutely pools across the plate at room temperature. While slightly fruity in the beginning, this cheese's pungent bite immediate jumped onto the palate, but faded with a salty, lactic aftertaste.

The golden-hued middle cheese with the curved spine is a beautiful example of a raw milk Abondance. Still a washed-rind cheese, Abondance was the firmest cheese of the trio, with a texture like Comte. Surprisingly, this was Carla's favorite, mostly for its bottomless finish. The initial taste was earthy, with the classic cellar-funk of an aged mountain cheese. A rising sharpness on the palate slowly faded into a drawn out savory, nutty finish that you could truly relish.

Lastly, the bottom cheese is a quirky American invention called Beerkase. Despite its name, Beerkase is not washed in beer (unlike the Swiss stinker, Beermat), but was created by happy German-Americans to celebrate the repeal of prohibition. And what to go better with a stein of beer than wedge of cheese? Aged on wooden planks, this cheese gets a modestly stinky rind to compliment the smooth, creamy body. We both found this to be a fine table cheese, but it finished slightly sour and didn't have enough allure to become a repeat favorite.

What all this analysis boils down to is that I'll be trying to make some different variations of washed-rind mountain cheeses in the near future. I suppose I could have just said that in the beginning and save you some trouble.
SHARE SHARE SHARE

I can't wait! My mouth is watering just thinking about it!!!

This is some really excellent information! Do you have your own source of raw milk for your production attempts? Are you a "professional" cheese maker? One of my favorite things to do is to try different smelly, and to most of my family members, frightening offerings. It sounds like you have devoted a lot of time and effort into developing your knowledge of the craft and art that is cheese making.

Thanks for sharing with the world.

Hi Evan,
Thanks so much for the comment! Currently I get my milk from Clover Creek in Williamsburg, PA. There was a closer raw milk dairy, but they shut down last fall due to the rising costs of feed. I'm not a professional, but I do make cheese for my family in the spring and summer, just as one would put up jam and jelly. Although I try to extend that as much as possible; curing meat, making alcohol, converting that to vinegar, collecting wild yeasts, and hopefully growing more of my own food with each passing year.